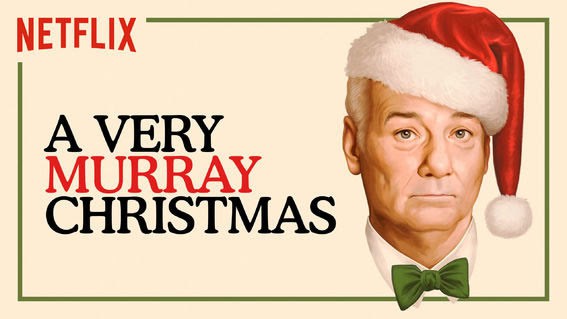 While an interesting concept in practice A Very Murray Christmas felt very...forced. I honestly did like it however like anyone else watching it I felt very confused as to what was going on and what exactly the whole point of the film was.

This Netflix musical film written by Bill Murray, Mitch Glazer and Sophia Coppola has a seemingly simple premise; Murray (as himself) worries no one will show up to his TV show due to a massive snowstorm in New York City. Through luck and perseverance, guests arrive at NYC's Carlyle Hotel to help him — dancing and singing in holiday spirit.

It seems to me that at the cost of story musical numbers were wedged into the film or perhaps this was an attempt to hide the lack of story. It was frankly a little disappointing from the aging Murray as I had high hopes for this film. I'm not saying that it didn't embody the spirit of Christmas because in a way...it did.

Don't we all in a way force ourself through this holiday to sing, dance, eat and be merry even if all the forces of the world try to stop us from doing so?

Perhaps this is what Murray and co were trying to communicate with this film and if they were then bravo because I'd say that it does that successfully. However if there was another message it was distinctly lost on me.

The ensemble cast of singers and actors that we know and maybe love were interesting choices also but kind of fed into the "plot". First up was Michael Cera as an odd manager character, then the inclusion of George Clooney for some old age charm (as everyone still likes old George), and finally Miley Cyrus who does so much wrong but yet so much right that we really can't help but look at her. The odd one out however of this ensemble cast...Chris Rock.

This was without a doubt one of the whitest Christmas specials I've ever seen which I don't really a problem with. It happens, people get cast and they're all white, it's alright. But they've gone out of their way to firstly get Chris Rock (which I really hope cost a lot) but then not only that they've got him out in a snowstorm that has managed to shut down New York. This would never in a million years happen. No smart black man would go out in a snow storm like this. There's a reason you never see a black man in Alaska and it's not because we can't afford it. No it's because we're not stupid! If it's cold you stay the hell inside!! If they were going to have Chris in it they should have started him in the hotel but they didn't and I was shocked.

The one saving grace of this film is the musical numbers are pretty good to listen to. They maybe should have just released the soundtrack or maybe let some sort of audio book...saved us having to sit through the film. But that's just me. Maybe you saw it a little differently.