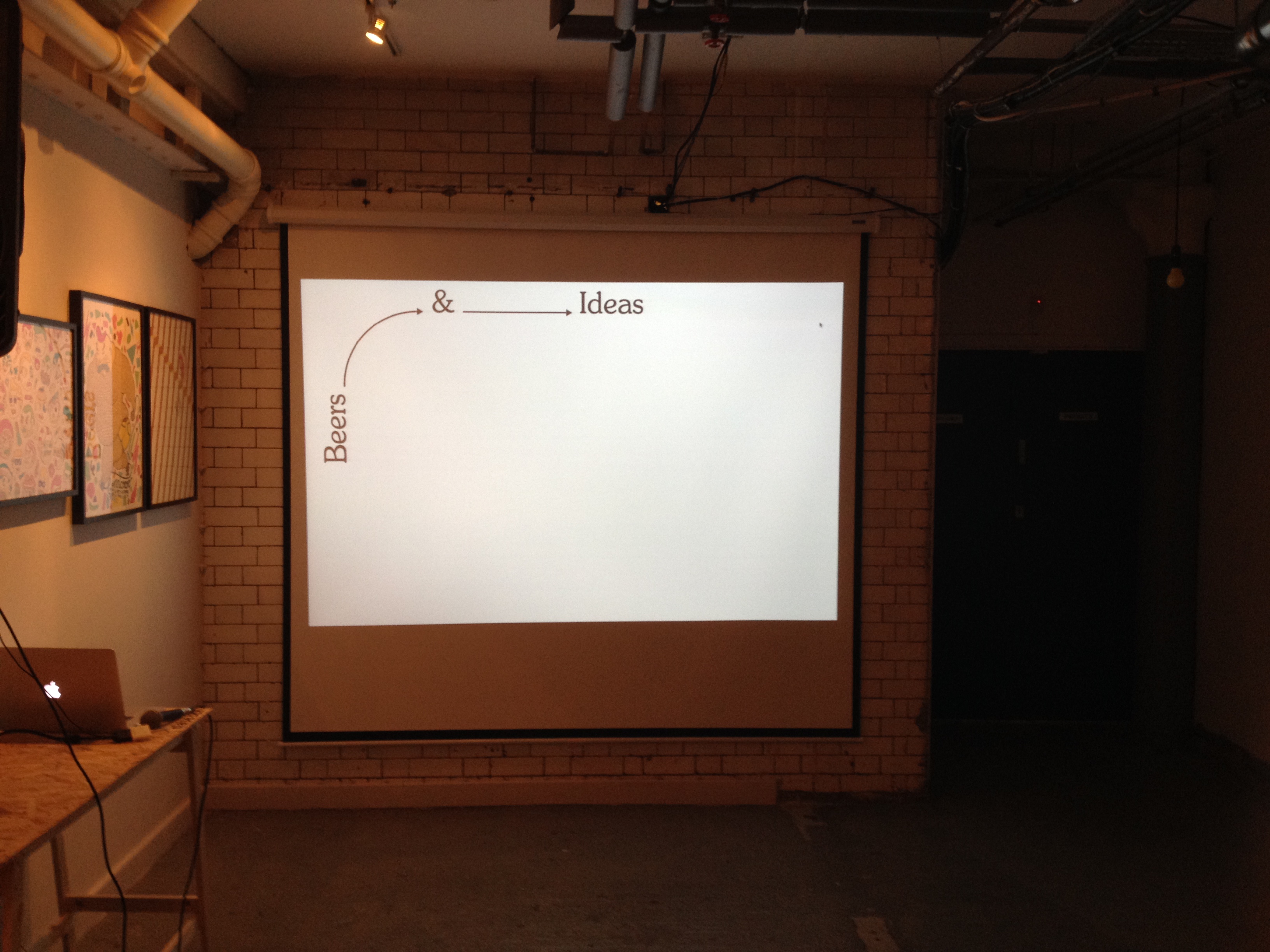 Last week I went to an event that some might say was unrelated to TV and film, however I would say it's through events like this that truly inspirational ideas, shows and films come to life. It's a crossroads of creative people that is usually only seen in places like universities. It facilitates the meeting of similar and different creative minds in a great format.

With this post I'll share the fantastic ideas that were presented and the amazing variety of people that gathered.

This was only the events second instalment however from what I saw I would say this should be a regular thing.

The first Beers & Ideas took place in November and had lots of interesting ideas from local creative folk who all had good things to talk about and contribute. This second instalment did not disappoint either.

Beers & Ideas is a free networking event hosted (so far) in Manchester at the very cool Twenty Twenty Two.

The difference between this event and others is that it gives creative folk the chance to voice their ideas in a public forum with the view to collaborate with others in the room.

The atmosphere is very relaxed and open with the options to take the stage, use a PowerPoint, talk one on one or even just listen.

The event was started as an idea, in the very bar (Twenty Twenty Two) that it was being hosted at. Coming from the mind of Andy Cooke; an independent graphic designer working between Staffordshire, Manchester and London.

Designing for clients of all sizes across identity, print, editorial, packaging and screen. He is part-time lecturer at Staffordshire University, whilst running RareKind Manchester, Beers & Ideas and the The Umlaut.

In true fashion of a good host Andy took the lead in presenting his idea first ensuring that everyone was comfortable with sharing theirs as well.

Andy's idea was to set up a "Graphic Designers Book Club" which would help connect designers with other designers who had books they might not be able to afford or do not have access to.

To me this sounded like a great idea that could also be used across other disciplines where this issue may arise. I was not alone in my thought that it was a great idea and suggestions/questions were openly discussed. My hope is that this idea becomes a real thing as it could be huge and extremely helpful for creatives (and possibly more). 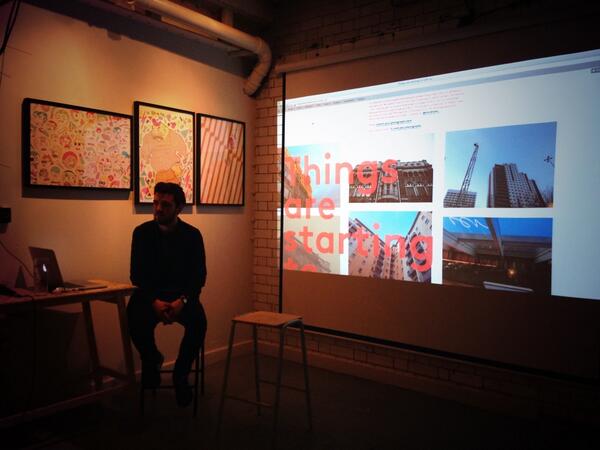 Next to present was Chrish Dunne a third year Graphic Design student at Leeds Met. His idea was to quote:

A collection of low-angled photographs presenting urban life in a different perspective. We spend most of our lives travelling to work, school, university—etc—and we get to a point where we no longer take in our surroundings because we’re so used to seeing them. This project invites you to take a look up: what do you see? Photograph it and send it in. All photographs will eventually be compiled as a book.

via Things are starting to look up

As with all the ideas I really liked this one and agree that people don't look up and take notice of the beauty around us enough. In fact, hours before when myself, Jon and Adam were walking around Manchester I noted that very fact when I myself was admiring some of the beautiful architecture that the city has.

You are free to submit any photos that meets what the project needs to his website http://thingsarestartingtolookup.tumblr.com . From chatting with him I believe this is part of his course (I may be wrong I did go drinking afterwards) so any help is welcome. I myself will be sifting through some of my snaps on Facebook for submission, as I have a few he will probably like. 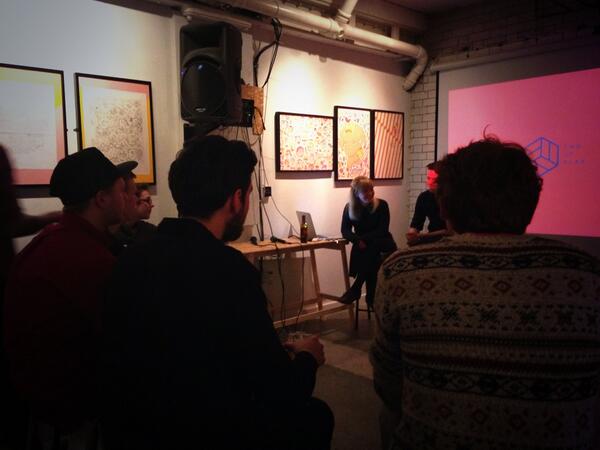 Next up to present were a duo; Jenny Nuttall and Richard Pay who had a number of ideas to present that night. For some unknown reason they were a little nervous! I don't know why though as they presented 4 great ideas. 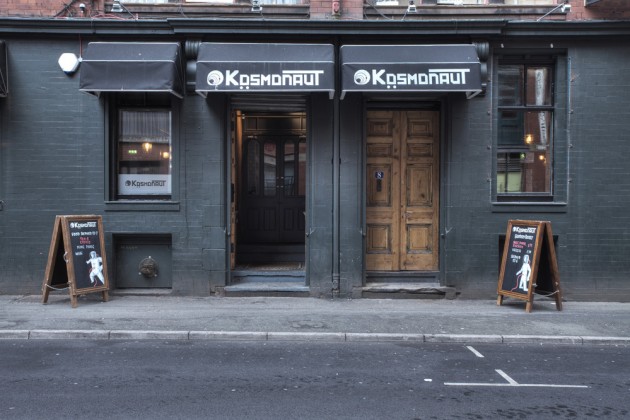 The second idea presented was 'Play Exhibition' which is a way to promote Manchester artists as they explore what "play" means to them. It's also aiming to raise money for a project/charity called Play360 and I believe they are looking to have a playground made in Thailand through the charity.

This exhibition of creatives art exploring play is still in the first stages of organisation. If you want to get involved visit their Twitter and drop them a tweet! Or even drop them an email at endofplay@outlook.com

This was based on an idea started in the United States as part of an urban intervention project in Austin Texas. Over the years it has spread worldwide and over 200 red swings have been hung.

Jenny/Rich if I'm wrong about that please let me know and I will update.

Must endeavour to make better notes when drinking but let's be honest we'll all be very impressed if that happens.

The final idea presented was by none other than Adam Playford (after some gentle nudging by me).

The idea he presented is something he is putting together called Little Scamps which is still being formulated.
With that in mind I did edit the video slightly as some of the idea presented still has to be finalised but gist of it still remains.

And that was Beers & Ideas or rather the ideas presented. There were quite a few people I didn't get a chance to talk to unfortunately, but believe it or not I'm a shy guy at times even with a drink in hand!

I did get talking with an Ed Sheeran lookalike who goes by the name Andy Evans but personally I think he should just say he's Ed.

He's a young designer still at university (first year I believe) and he is doing freelance work on the side! This combined with the fact that he has already started to go to networking events like this is unheard of (or it was when I went to uni) and honestly I was blown away by his drive to succeed.

Check him out his website gingerbreadgraphics.com and especially the video telling you all about his company (he set up when he was only 17!) and his story. This guy is going places so I'd get him while he's cheap!

Okay that's really it. Not quite the special post that I had planned but it is coming I promise! As always I'll end with something that sums up the post or rather this time how I was while people presented.

Taking the lead from my previous post on Beers & Ideas I've decided to write about HBO's new tech based satire which pokes fun at Silicon Valley. As it's Tuesday and I want to put something new out for bloghour I'm giving myself an

It's never too early to start planning your Halloween costume in my opinion. If you want something that is going to look awesome and not like an over priced piece of trash you got from the store you should always make your own even