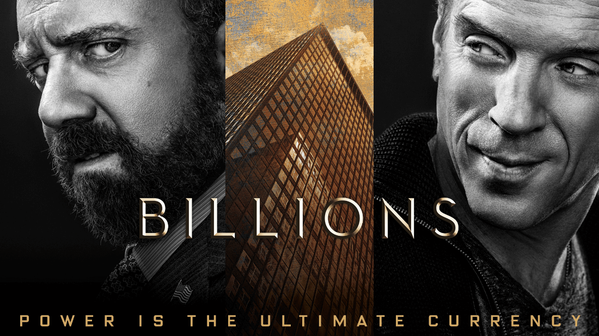 This show is fantastic, it's like the perfect blend of House of Lies and Suits. If you're not watching it already the basic synopsis is:

However the problem for the audience lies in who do they root for? Both characters are massively influential on their worlds which for better or worse affects the entire city.

Bobby "Axe" Axelrod, played by Lewis is the sole survivor of the hedge fund during the September 11 attacks. Publicly he's seen as extremely charitable and generous, but the reality (which hasn't quite been revealed yet may be far more nefarious). A man who's literally risen from the bottom of the city to the very peak of it. The people's champ, proof of the American dream.

But this meteoric rise has captured the attention of Chuck Rhoades, played by Giamati; the U.S. Attorney for the Southern District of New York. A ruthless attorney with a respect for justice and the law that he expects others to emulate which brings him at odds with Axe who threads the line of what is acceptable in the eyes of the law. Rhoades is like polar opposite Axe coming from a well-connected and very rich father but chose to serve the people for their own good.

As I've watched the first few episodes and particularly these two characters I can't help but feel torn as to what's right and what's wrong, or rather who. They each have redeeming features that call out to different parts of my psyche, nay the collective consciousness of the audience and that's exactly what the creators wanted to do with this show I think.

In the current world we live in there are 62 people that are as wealthy as half of the worlds population. This isn't something I've made up or something that's part of Billions the show this is a fact. I think when the writers made the show they wanted to present this issue in a different way. From my point of view they wanted the audience to ask themselves a few questions:

How did they make this money?
How are we still allowing them to make money?
What would you do if you had that money?

These are questions we ask ourselves nonchalantly anytime we see a headline about the rich...but do we ever really examine it? This show allows us to think about whether or not we could actually make an argument for the mega rich staying rich or not staying rich.

The show is very clever about how it poses this to us in a tale loosely based on the life of a real crusading federal prosecutor of financial crimes Preet Bharara, the U.S. Attorney for the Southern District of New York.

A clever show that's beautifully written and a joy to watch. No it's not going to tell you how to get rich but it might make you question why you haven't done something to get yourself there...and what you're willing to do.