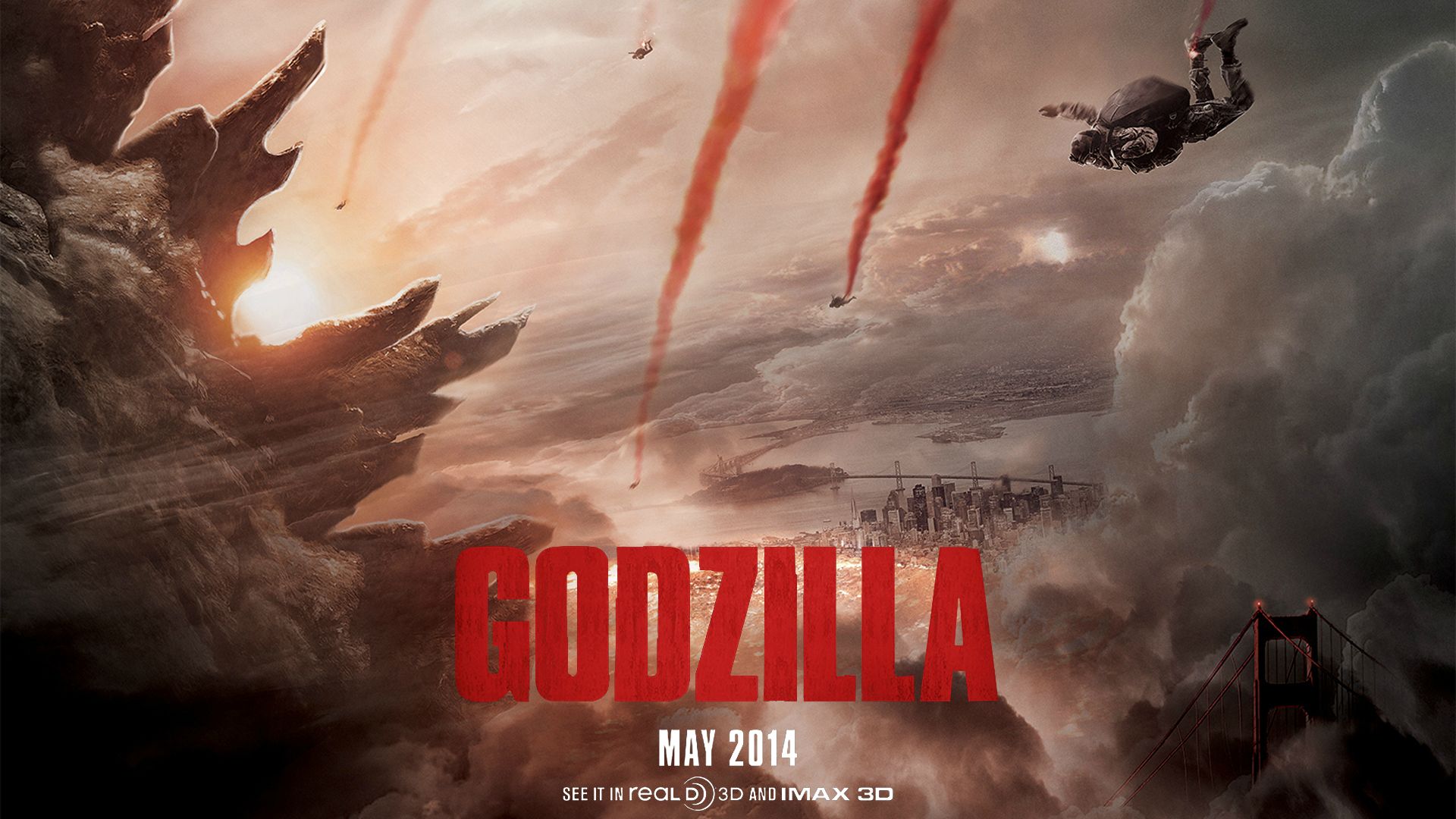 Yes you read right I was that much of a Godzilla fan that I went not once but twice! I am slightly disappointed that I didn't see it in 3D or at the IMAX but that can't be helped now. In this post I'll write about what the film is about, what I thought of it and how the experience differed between the two viewings I went to. I will warn you now that there will be spoilers so if you don't mind that then read on!

A Tale of Two Screens

As I mentioned above, I got so excited about the film that I went to see it twice...in 2D. I actually meant to watch it in 3D at one viewing but forgot...whoops. However it wasn't all bad. I would say 3D would have amplified certain scenes and would recommend it for those who've not seen it but it is not a necessary element to enjoy this awesome film.

My first viewing was on the opening day of the film and I went to my local Odeon. I had the stale pop corn and sprite. Honestly minus the film it was a mediocre experience with a crowd (which kind of helped).

My second viewing was at the Electric in Birmingham. For those of you who haven't gone before I wholeheartedly recommend it. I especially recommend getting a couch and ordering your food and drinks to your seat. That's right you get waiter service and by drinks I mean those of the alcoholic variety (non-alcoholic ones are also available).

The cinema is Britain's oldest working cinema and has style oozing out of it's pores. From old style ticket stubs to fantastic seating not to mention the drinks and snacks available. They always have a great drinks selection available from pale ales to film themed cocktails. For Godzilla they created a special selection of cocktails that I just had to take advantage of. In fact I probably overindulged in snacks and drinks that night. I couldn't help myself though because the selection was that good.

The collage below doesn't do it justice but it's the best I could do with my piddly phone camera. 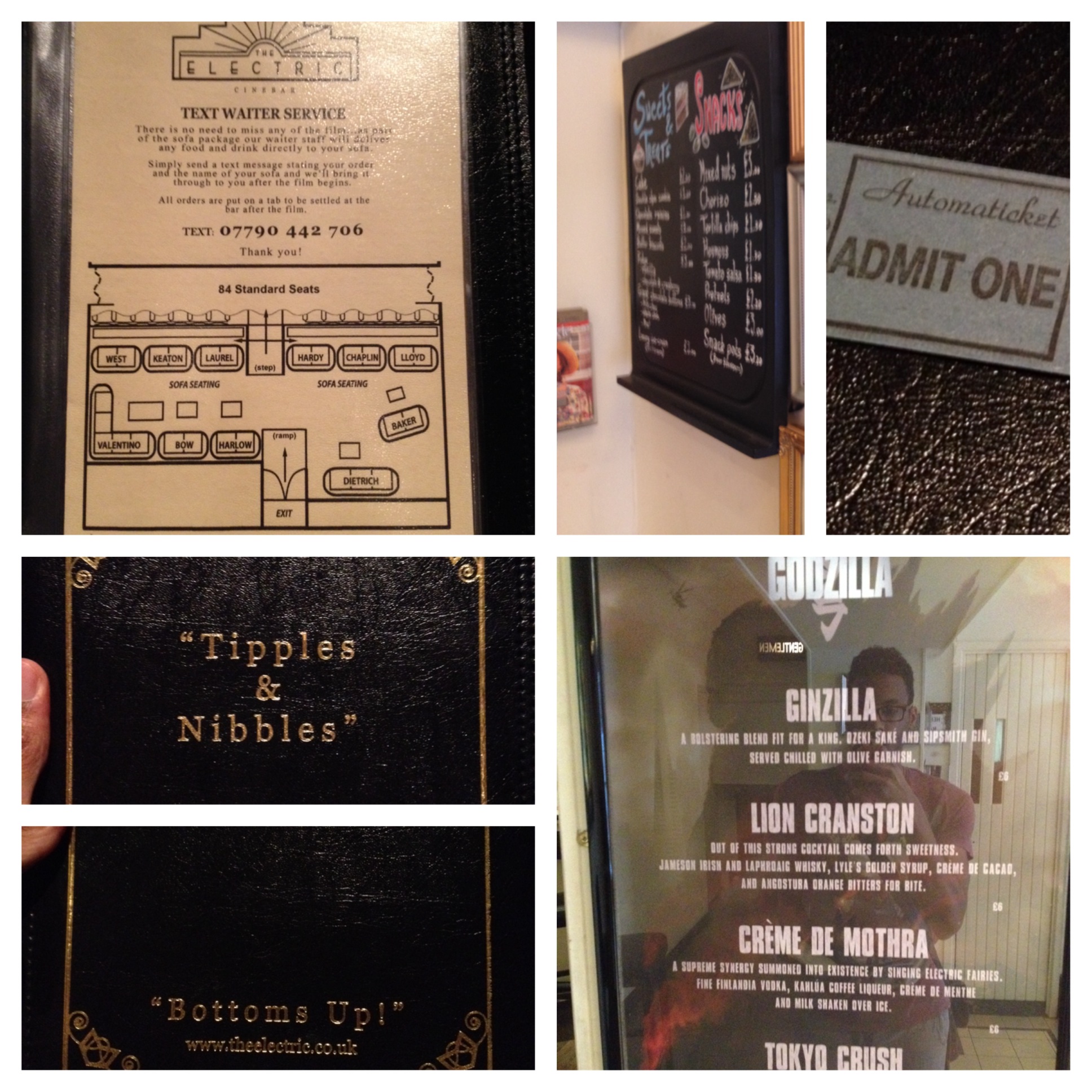 I hope you take the opportunity to go to see Godzilla or another film at the Electric if you get a chance. It felt like I was watching an old film with new effects and believable acting.

It felt like how a cinema should feel watching that film. Loved it.

Those expecting a film like the 1998 version were sure to be disappointed as Gareth Edwards thankfully took it down a different route that harkened back to the original Godzilla movies.

The film starts in Japan at the Janjira nuclear power plant in 1999 with Joe Brody played by Bryan Cranston. Joe is convinced the recent seismic activity in the area is something entirely different.

They say bad things come in threes, in Joe's case this is proved correct as in an unlucky turn of events his worse fears are proved correct as his birthday gets ruined when the plant has a tragic accident, which his wife ends up dying in too! This guy just doesn't get a break.

The film skips forward 15 years (it's 2014 in the film and in real life...this could be happening right now) where his son has grown up and joined the military. Aaron Taylor-Johnson plays Ford; Joe's son who has apparently fallen out with his dear old Dad after Joe became paranoid that there was a cover-up happening with the accident 15 years ago. Ford is forced to fly to Japan from San Francisco leaving his wife and son behind to bail out his dad. When he does Ford convinces him to come home to meet the family but not before Joe takes one last trip to the restricted zone to prove his conspiracy isn't a lie.

This is where the shit really starts to hit the fan as he is proven right about there being a conspiracy as Ford and Joe are taken to a secret base built on top of the old plant. Very quickly it becomes apparent that they were trying to keep something contained there for the past 15 years...something that was finally waking up. 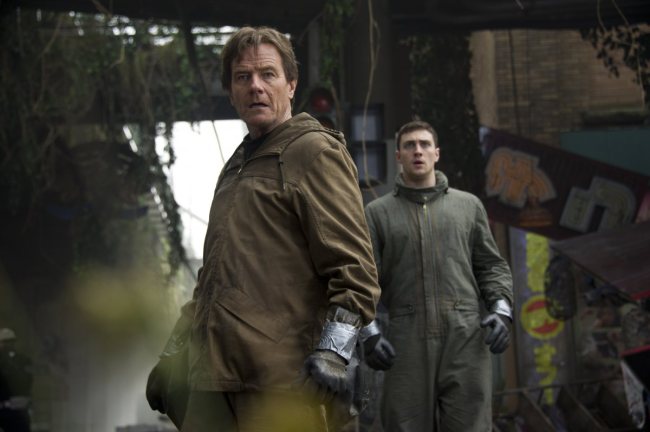 Chaos ensues as the M.U.T.O. (massive, unidentified, terrestrial object) destroys the facility and flies off. In the chaos Joe is gravely injured but not before imparting crucial knowledge in an interrogation minutes before the M.U.T.O.S rampage. With this the military is aware that the monster has an "EMP" attack. They still send helicopters and planes uselessly at it...soldiers die. Ford survived the first rampage and is there to witness the second in Honolulu.

Godzilla enters onto the scene and immediately goes to fight the M.U.T.O...even after the military tries to shoot him (come on all monsters are a threat). At this point any sight of Godzilla is obscured as the audience is merely teased with glimpses of his form. It's not until he steps onto the airfield with a massive foot that his scale comes to life as just that part of the body is enough to dwarf a plane.

The audience is yet again teased as the fight is shown mainly in a news clip seen by Ford's family back in San Francisco. Just as you are getting taken in by this fly on the wall bird's eye view of the fight (only way I could describe it) it gets taken away from you.

As Ford struggles to hitch a ride home with the military he finds his way right back into the thick of it as yet another M.U.T.O comes out of the woodworks.

I won't ruin the entire film but Gareth Edwards must be amazing in bed with the amount of foreplay he does with the audience before the big fight scene...and what a fight it was. A city got levelled. Godzilla managed to defeat 2 monsters on his own and not get killed by the military. What a dude. He should get his own film!

Thoughts on the film

The film at it's heart is all about family, this much is clear from both the human side and the monster side.

With Brody and his son in the first act it's all about loss and reconnecting. Brody loses his wife to the disaster in 1999 and his son in the subsequent years to his obsession with getting the truth. He only reconnects with his son just before he dies as he proves he was right all those years. Was it worth it to lose all that time with his son though? This is a question that director Gareth Edwards is posing to the audience in this situation and it is one a lot of people would struggle with if they're honest with themselves.

With Ford and his family it's all about the strong family bond and belief that they'll be where they say they will or that they will be reunited. Ford fights through disaster and monster attack one after the next before finally reuniting with his family. His wife played by a lesser known Olsen (Elizabeth Olsen) trusts that he will be there even as the city evacuates she clings to that notion but gets her son to safety with the hope she would be reunited with him.

There's even a bit with a little kid in Honolulu separated from his family who Ford saves. The kid is a bit of a dick and finds his family without even a thanks from the kid or the family. The moral of that story is...some families can be a self serving dicks forget to say thank you sometimes.

On the monster side the M.U.T.O's are destroying cities as they make their way to each other to mate. Man is in their way. All they want is a family of monster babies. Is that too much to ask for? Apparently so as Ford destroys the brood and Godzilla kills ma and pa M.U.T.O.

Family is clearly a theme that runs throughout the film and as the audience you can't help but root for the curse that seems to hang over Ford to be broken and for him to be reunited with his wife and son. If you're a particularly twisted individual you'll root for the M.U.T.O to have their babies. Nevertheless the idea of family is clearly communicated to the audience.

Besides this idea of family, the film is very good at teasing the audience. As said before Godzilla's big scene doesn't come until near to the end but Edwards keeps you baited right up until that moment with just the right amount of suspense. The military train scene you could feel something was going to happen but you had no idea it would be that until it happened.

In fact I think the baiting of the audience started before the film with the trailers which suggested a larger role for Cranston's character (killed him at the right time though) and teased the M.U.T.O's. Edwards played with the audience in such a way that they didn't know what to expect.

When the big fight came it was intense, and had the audience universally grimacing with every devastating hit Godzilla took. At one (hilarious) point Godzilla is being double teamed by the M.U.T.O in a way that is so similar to wrestling that I can't help but think that Edwards is a not so secret fan which would not surprise me. This was one of my favourite scenes from the fight. The others would obviously be when Godzilla smashes Mothra into the building which was absolutely brutal and then obviously when Godzilla uses his atomic breath. that was just awesome.

One of the only low points for the film in my opinion is the way it ended with him vanishing into the sea like that. The news headline I found funny as (and I can not emphasise this enough) he destroyed the city!! When did he save it? You just survived. In fact why are you flying a helicopter near a fire breathing dinosaur???! I suppose Edwards was trying to convey that Godzilla was a gentle giant at heart. Throughout the film he goes out of his way to avoid killing humans. I'd go so far as to say there was less Godzilla related death than there was Superman related death in his film. You heard it here first Godzilla is a better hero than Superman the accidental mass murderer (I hope Batman cites how many died because of him).

Overall I loved the film. It had highs, it had lows, it made me laugh, I could have cried, I cheered and winced throughout the fights. I don't think we could have asked for a better monster flick and honestly if you're complaining the please I welcome you to try and pen a better script.

I hope you enjoyed my take on Godzilla. If you agree/disagree with anything in it please leave a comment I'd love to discuss it.

As always I'll end with something that sums it up.