Like many of you and as a true television addict; I started watching the second instalment of Netflix's original series, House of Cards yesterday and finished it off today. For those of you who need a refresher on what House of Cards season 1 brought us here's a video from What's Trending that might jog your memories (fair warning to those who haven't ever watched the show this video contains spoilers)

So as you can now see a lot happened last season during those 13 episodes. Now that it's back for a second season and 13 more episodes even more has happened in the epic tale of Frank (Kevin Spacey) and Claire Underwood.

I will give those who don't want the second series ruined for them fair warning I will be going through some key points in the series and major spoilers will be included. Do not read this unless you are prepared for that. If you haven't watched either season yet (and somehow skipped the video above) I urge you to go sign up for a free Netflix account (it's what I did) and watch them, you pay nothing for a month so it's worth it!

Now that I've warned you I'll continue. This post I will cover season 2 as a whole, what I thought of it and how I related it to power and submission.

The first episode of season 2 (or chapter 14 as Netflix calls it) sets the scene for the entire series in my opinion. The Underwoods united in their quest for power as Francis enters his role as the Vice President, Russo dead and the reporters suspicious of Frank's involvement.

Last season we saw that Claire was just as capable as Frank, but this episode and season confirms it. The scene from the first episode that closes the door on the pregnant woman from last season highlights this as she makes a threat that would make anyone with ovaries quiver in fear.

With the Vice Presidency, Frank is expected to move to a more secure location than his town house. This is one case where Frank can clearly be seen to be flexing his new power as he refuses to move and has the secret service set up the necessary infrastructure in the house. He even goes so far as to have Edward Meacham appointed to his secret servcie detail which requires an accelerated training programme so he can even be in the secret service!

Covering up Russo's death murder apparently did not end with the conclusion of the first season. With the reporters Zoe Barnes and Lucas Goodwin hot on the trail of the only true loose end (other than Zoe) to the Russo conspiracy, Doug has no choice but to move Rachel yet again.

Still with no proof Zoe is forced yet again to approach Frank as she tries to find out why he supported Russo. Zoe also makes the tragic mistake of trying to find out why Russo was in the passenger seat when he died as well as not deleting her phone records when asked in the park. She later pays for this as she is flung into the path of an oncoming train later in the episode.

Zoe's murder was an unexpectedly brutal act by Frank even compared to his previous murder of Russo. It could be said that this was something that happened in the heat of the moment as Zoe pushed too far by asking about Rachel. He clearly wanted to end it with the phone records being destroyed but as soon as she mentions the idea of murder he orchestrates it so that she has to chase him to the camera's blind spot, giving him the opportunity to push her into the path of the train.

The death of Zoe pushes Lucas to chase the story that she began. But with no real proof he didn't have much hope to begin with.

When Claire see's the news of Zoe's death it's not clear whether she knows Frank did it but I like to think she's that cold hearted she did and doesn't care. And if anyone was questioning whether Frank had any remorse over killing Zoe they quickly put that to bed as he turned menacingly to deliver the first message of the season to the audience.

If that wasn't enough to cast aside the judgement of the audience, the episode ends appropriately on a shot of Meacham's birthday gift to Frank. What? It obviously stands for Frank Underwood...right?

The first episode also paved the way to introduce a new character into the mix. Franks choice for who should replace him as the new Whip, Jackie Sharp.

Introduced from her legs up Jackie is a veteran and congress woman with a realistic long term plan for her career. As you would expect Frank manoeuvres everyone so that his choice in Whip is the only logical one. His choice being her for her "ruthless pragmatism".

This new Underwood is just as good if not better than Frank but she is affected by the deaths on her hands from service to her country whereas Frank is clearly unphased by those on his. This conscience does not stop her from being ruthless however, as she does what she has to in order to get the job done.

However the one attribute that stands out is that she is not easily manipulated by Frank throughout the season, which is not to say she isn't in the end, it just takes a little longer than most to submit.

This season the Underwood's showed a more united front from the very first scene where they are seen running together silently in the night with Frank slowing his pace so Claire can keep up. 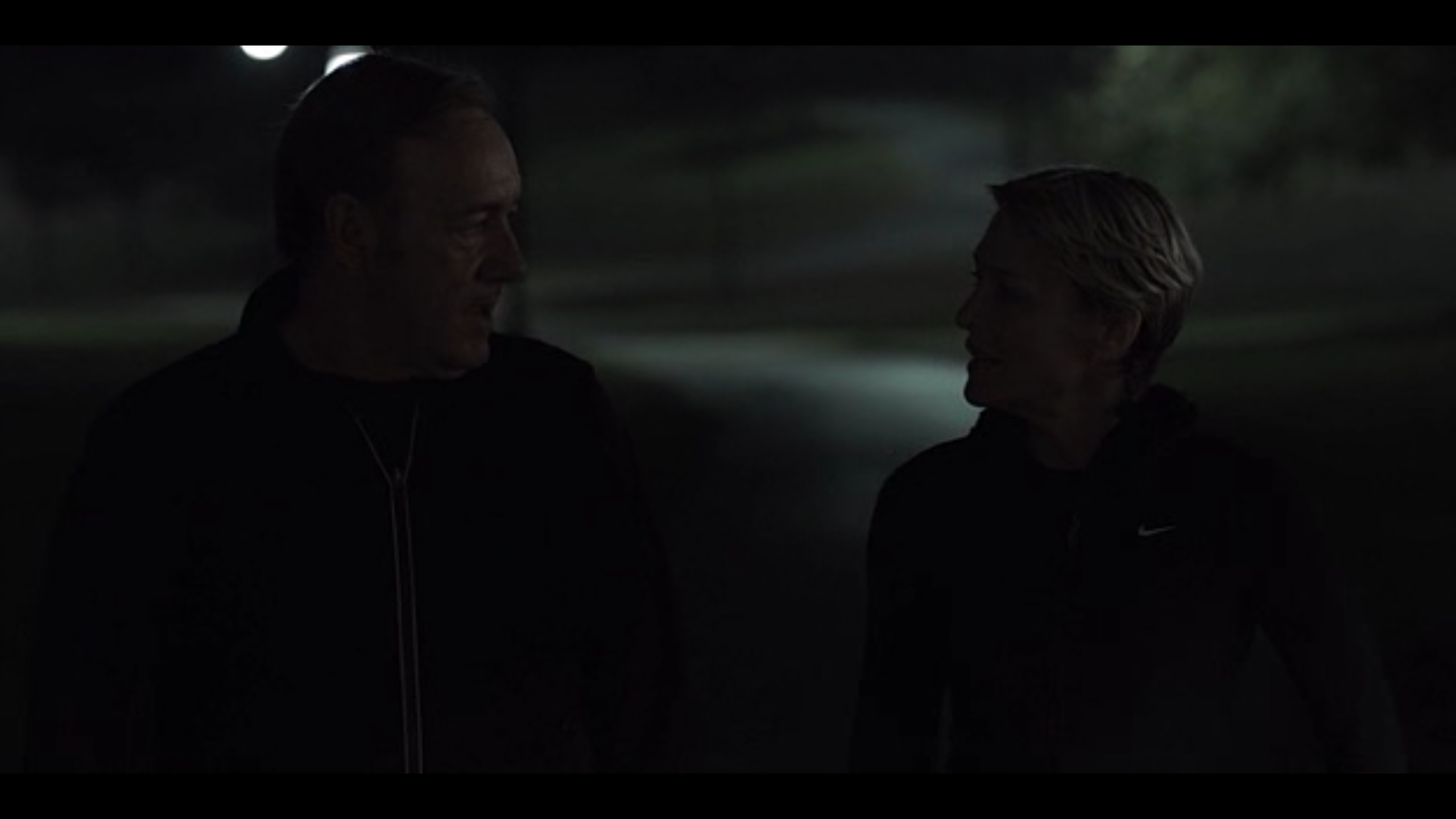 This continues throughout the season as they share knowing glances over the table, smoke together, scheme together and even fuck Meacham together...literally. Or so we are led to believe as all we see is kissing.

That was an odd but strangely expected moment in the series after the revelation last season that Frank had a gay fling in college. To me the scene was odd more because of Meacham who honestly seemed more attracted to Claire Underwood than Frank but initiated with Frank first.

Getting back to the Underwood's however; there are 3 defining moments where they showed that the cracks in their union were well and truly gone. First the moment when Frank finds out who exactly raped his wife all those years ago and he goes ballistic, only holding his rage because Claire tells him to so as not to put his position in jeopordy. The second is when Claire is threatened by a bomb. The third is right at the end when she lets him bask in the moment of enjoying the oval office for the first time. The occasional clashing of two from the first season is mostly gone as they now submit to each other and act as one.

Individually they also had their own crosses to bear.

Claire's big lie over how many times she had an abortion and how she got pregnant due to the rape by the general caused a big back lash and helped to drive her individual story along.

She reveals this on a live interview against the judgement of the Underwoods communications director who had been told the truth of her abortions and rape moments before. Although only a slight bending of the truth if this were ever to come to light more questions about the Underwoods duplicity would surely be asked.

Frank in the mean time had a different problem in that he was now in the public eye even more than before. He had to be sneakier than he was last season and rely on others to do his dirty work more than before.

One thing I noticed and loved is that with his coping mechanisms for stress evaporating around him (couldn't smoke for a while and video games were out of the question) he had to adopt a new coping mechanism in the form of toy replicas of a battle from the civil war. This replica is used multiple times as a metaphor for other things such as when Tusk rattles him and Frank breaks it. However my favourite use of it is in the penultimate episode when Jackie questions what it is and he answers:

With Frank's move to Vice President all of his moves now had to be less visible than ever before. But his enemy was one that had being using underhanded strategies for decades without anyone realising. I'm of course talking about Raymond Tusk, the man that got him the job as Vice President.

Over the season they go to war trying to win favour with the President. Deals not going through that were promised, whole cities going dark, Frank finding out about Tusk funnelling millions in funds through a casino illegally to Tusk sending in a trojan horse operative who turns on him realising Frank was a far better general. This goes back and forth before even Frank's wife is personally attacked with proof of her affair from the first season and if that wasn't enough Tusk attacks Freddy. You know Freddy, the nice old ribs guy! I was sad to see him go.

A risky play by Frank used the president and Trask against each other to make the president being ousted the best and only option for the country to heal. Such a devious bastard. I loved it!

The conversation between Frank and Freddy in the first episode about the ribs to me is how this season played out. The humane thing to do when killing a pig is to do it quick but instead this butcher slow bleeds them (which isn't exactly legal) but it made the taste that much better. I think it's fair to say that's pretty much how Frank handled his enemies this season as he slowly bled the President of his friends/colleagues until he got to feed on the delicious meal of his job as President of the United States.

What next season will bring

For me I think they should have done as planned and ended the series there but season 3 has been made a reality which isn't necessarily a bad thing, but to me it could ruin a good series. Season 2 was good not as good as the first but still pretty close. Season 3 might not be as lucky but I'm hopeful.

With the new season Doug's dead, Rachel's on the run, the hacker is probably not going to get his deal and Remy is back in the White House. This could make for an interesting season as questions get asked about who Rachel is, why Doug was hiding her and what exactly the new President is hiding.

Well those are my thoughts on the second season of House of Cards. Yet again Kevin Spacey played the role of Francis Underwood beautifully. I would highly recommend watching the series. Binge watching may not be the best option for everyone but if you want to avoid spoilers it is a good one. I did notice that their is a way around that if you are on twitter a lot. It's called Spoiler Foiler. Try it out and let me know how it goes. I'm usually up to date with stuff and usually spoil shows for myself ahead of time so I have little use for it but I'm very interested to know if it works!

As always I'll end with something TV related that I thought appropriate. This time it's something I did on my phone with a quote from the show. 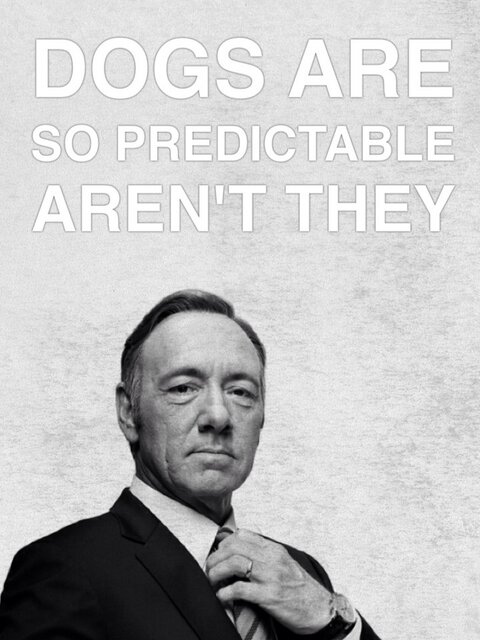