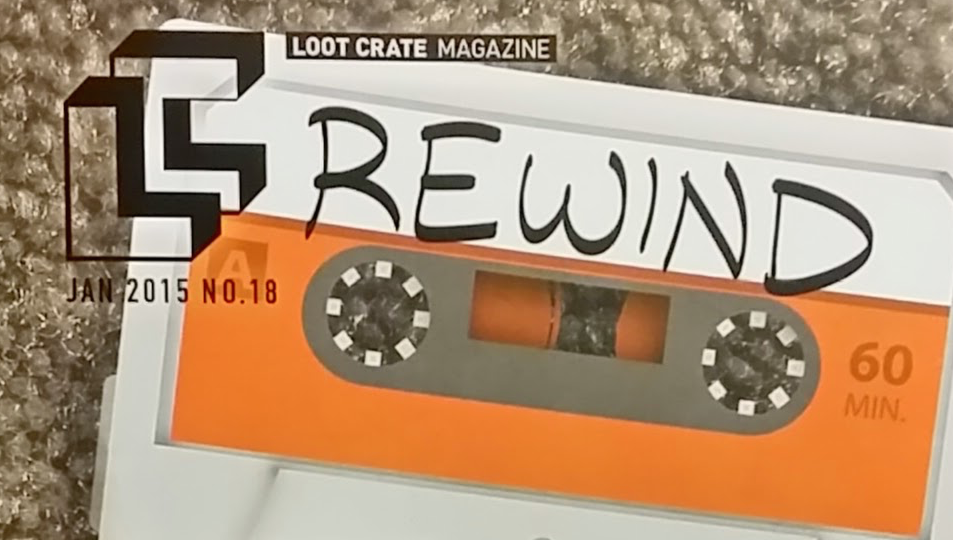 It's rare case that all the loot within a crate is something that I like but I have to say that this one is that rare crate. January's theme as you can probably guess from the picture was "Rewind" which of course means that the wonderful people at Loot crate were spinning the hands of time backwards, reaching into the past and bringing awesomeness back to us in the present.

I've had this crate for about a week or so but have had a few personal matters to attend to so haven't had time to review it until now so apologies for that but without further ado here we go...

As the theme was Rewind and the boxes have now become a little more interactive & creative, they chose to make it into a Loot Crate version of one of the classic game system that is the NES. Clad in the colours of Loot Crate (black and orange) this is a nice little touch that adds to the perfection of this crate.

The Loot Crate magazine of course also followed the theme of Rewind and had the instructions for how to alter the box to make it into the Loot Crate NES. Also included within it was a short but detailed history of Nintendo and how they are usually the first gaming system that comes to mind when we talk about retro gaming.

Also included within the magazine was a history of Voltron which features in both the normal loot and in the Mega Crate which I don't have a chance in hell of winning ever but one can always hope.

Finally it had a list of the loot that was contained inside of the crate.

Aww yiiis got my #Lootcrate I am such a #geek 😅

As you can see from my above post on Instagram I was more than a little excited about the crate and I had good reason. Included inside were:

Yes this crate had a lot of very cool and exclusive stuff with some hard competition for what would be my favourite of the lot. However I narrowed it down to 3.

The star wars comic book was always going to be one of the 3 with it's awesome cover artwork depicting Han Solo and Chewbacca protecting and delivering crates.

Then there was the Voltron t-shirt which is without a doubt awesome! It is without a doubt one of the shows that I adored when I was growing up and along with power rangers is one of those shows that had me obcessed with figuring out how I could make myself a robot to pilot (a lifelong ambition I should be completing this summer if things go to plan). But yes if you haven't heard of Voltron your childhood must have been missing something vitally important called a TV.

However the thing that was surprisingly my favourite is one of the smallest pieces of loot within the crate this time but it's as if it were made for me. Yes it's the exclusive figure. I had a 1 in 6 chance of getting the one that I did but somehow I got it. Standing at 3 inches tall most people would overlook it's significance as just another figure. Nay. This was not just another figure, it was a blast from the past of both my childhood and from a recent Halloween costume. 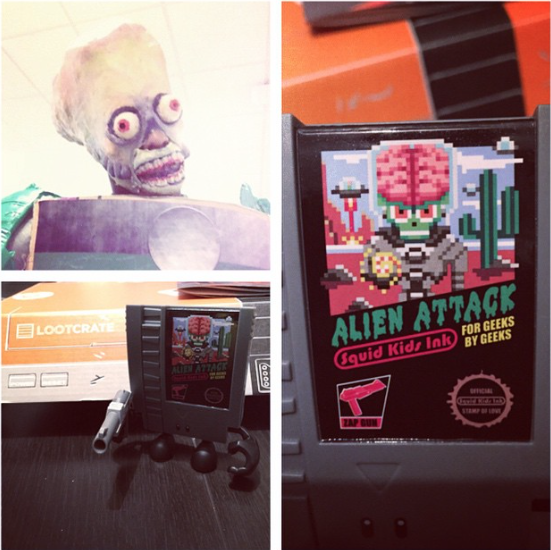 Yes the figure I got was of Alien Attack which of course depicted Martians attacking which I had dressed up as for a Halloween 2 years ago. Yes, call it what you will; fate, luck...but I say I was destined to have this crate.

I'm not overlooking the other pieces of loot within it but I have dinner to get out of the oven so I will stop the review here with the 3 pieces of loot I liked the most.

And for those of you still wondering what the hell Voltron is, check it out...