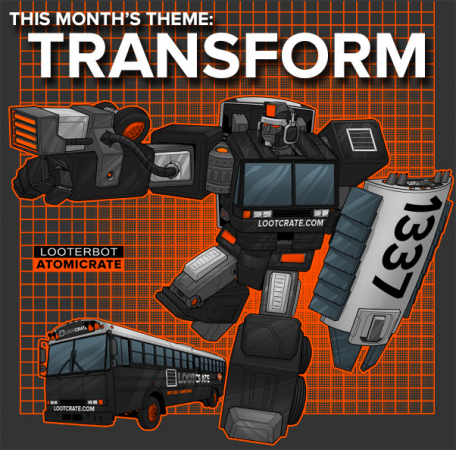 This was the first time in the few months I've been getting Loot Crates that I've actually got hold of the crate on the day that it got sent out to everyone so I was one of the first to get a pic up on Instagram of my Loot!

Unfortunately I was a little tired and lazy from going out the Friday night so ended up not writing over the weekend...whoops.

So a few days late here's my review of Junes Loot Crate!

As you can see from the picture above there were lots of little gems included in the loot this month with the crown going to the exclusive Marty McPrime t-shirt creation from Nathan Davis & The Hundreds. This is an amazing mash-up between Marty McFly and Optimus Prime. I love it! I will be most definitely be wearing it on the Friday of London Film and Comic Con which is only a few weeks away so I'm glad there's at least one piece of geeky clothing I have already chosen out to wear!

As always there were bits of exclusive content, games and articles within the mini magazine in the crate. The guys at Loot Crate thought it would be cool to have Looters create Transformer name.

To go with my Decepticon sticker and action vinyl from Hasbro & Loyal Subjects (Thunder Cracker) I got the name Rage Hurricane! So for all you who know me and think I have a bit of a mischievous streak it seems lady luck and the Loot Crate packers also have my number as I am apparently a Decepticon!

I look forward to my lord Megatron trampling over your bones and crushing Prime and his stinking Autobots!

Also included were some Warheads candy which transform as you suck them (very on theme there!!), a very cool looking Transformer Hex Bug from Hasbro & First Innovations Labs and some MLG (Major League Gaming) swag.

What I thought of the Loot

Overall the Loot this time was okay but could have been better. Unfortunately I'm not a big gamer at the minute so I have no use for the MLG Starter kit but I will endeavour to find it a good home.

I did really like the ingenuity used with the Warhead candy as it is a transforming food which in all honesty is fun to eat.

The Transformer that I got now takes pride of place on my shelves at home but getting the gun to fit into his hand was a bit more of a struggle than it should have been. I was a little worried I was going to break his hand. However now that he's armed he's ready to take down any Autobot scum that enters my room!

As I said before though the thing that saves this Loot Crate is the Marty McPrime t-shirt which is ingenious with a transforming Delorean. I can't wait to show off in front a load of geeks in London and tell them about the sweet deal they could be getting with Loot Crate. Most would pay at minimum £20 for the t-shirt and with the crate costing less than that this makes the crate amazing value for money with all the extras I got.

One of the stand out bits for the magazine has to be the well written piece of the universal appeal of Transformers which cited it's 30 year history from past to present briefly mentioning the important factors that led to it's creation and reimagination over the years including Beast Wars which I mentioned in my previous post and of course the Michael Bay movies.

Overall I would give this crate a 3.5/5 as it could have been better but it could also have been much worse.

I hope you enjoyed the review and now that I look back it is also my 50th post!!

Hard to believe I've been doing this almost 6 months and I'm well on target for my personal goal set way back in my first post.

To celebrate I will be launching a small Facebook competition on my page to win the Hexbug from this month's Lootcrate. Keep an eye on the page to find out the details!

As always I'll end something that sums up my thoughts. This time its on being a Decepticon.