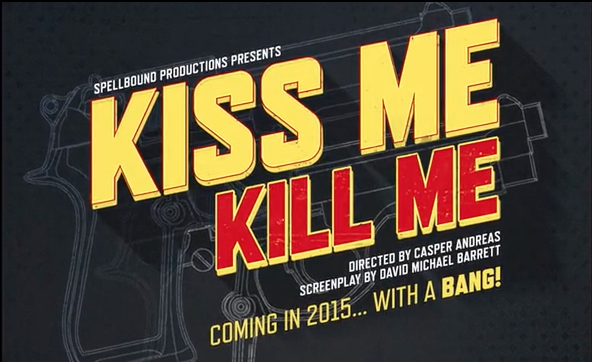 Didn't really expect to be writing this post but here I am typing away because the concept deserves to see the light of day as a fully realised film so although I can't support it financially (I'm a poor man with a lot of debt) I can tell you what it's about and why you should be supporting it if you have the money.

If you don't know what a Kickstarter is you haven't been paying attention to this blog or well the world for the past few years. Basically it's a crowd funded business, idea, creation etc. that has rewards attached to how much you pledge. If the Kickstarter project is successfully funded your donation is taken and you get the corresponding reward. If the project isn't funded your money stays with you and life goes on but without another new amazing creation (sad but true).

This project is a movie, a passion project from a small group of talented and experienced individuals who have a unique concept they want to get off the ground called "Kiss Me, Kill Me".

The story is quite simple in that it as the creators of the Kickstarter have put it:

The cast is a diverse on including some personal favourites like Gale Harold who has featured on shows such as Queer as Folk, Deadwood and most recently Defiance.

But the one that sells it for me is Tom Lenk better known as Andrew from Buffy the Vampire Slayer. I don't know what role he'll be playing in it but it's bound to be awesome!

Who doesn't love a goood murder mystery? Great ensemble casts who could all be the murder.

The question is do you love the idea of a gay murder mystery with lesbian gal pals, a drag queen femme fatale and of course a lesbian detective!

I sure as hell do!

This is so different and off the wall that it needs to be funded!

Anyway check out their video below or just go to the Kickstarter page and pledge some money.

I wish I could do this right now...