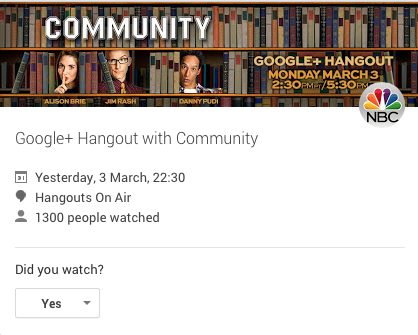 In a moment of true fandom for a show I took part in my very first Google+ Hangout! It was a disastertriumph for me as I had absolutely no idea what I was doing and thought for some bizarre reason that Community stars; Danny, Alison or Jim would see my questions and answer them. Oh how wrong I was...

So here are a few things I learnt from the experience.

Ask questions everyone wants to know the answer to

I noticed that there were dozens of questions before and during the session if not hundreds. As can be seen in the screen shot above there were 1300 people watching so the questions that got answered were the ones that got noticed as ones everyone wanted to know. These were also usually questions that were asked early which lead me into the next point.

This I cannot stress enough as I asked half a dozen questions before I realised where I went wrong. I knew in advance of the hangout but did not realise that there was a hierarchy with what questions were seen by the moderator and consequently the ones Danny, Alison and Jim answered.

Those who had asked questions early were far more likely to have gotten their questions promoted to the top of the list by other users who liked the questions they asked.

That isn't to say my questions weren't good but they didn't get seen as a result.

I quite like this feature if I'm honest as it controls the crowd who are clambering for their question to be answered and makes them think creatively about what to ask that will be popular and also makes them want to be the first to ask it.

There are some freaks out there

This last thing I learnt is one that might just apply to the Community Google + Hangout. For those who don't know (I didn't know this until days earlier after a friend told me about it) if you search "Alison Brie" on Google one of the things that pop up as a suggestion is "Alison Brie feet". Now...I'm pretty sure my friend wasn't looking for that but it appears that there is a weird fetish for Alison Brie's feet which is so popular that it even ranks in Google searches.
Mike Schneider the host/moderator of the hangout Googled the 3 stars and found this strange search. What was more surprising is that when he mentioned it Alison immediately began to tease the audience.

So as against normal behaviour as it may be, don't be afraid to let your freak flag fly with your Google searches. You never know what might happen as one lucky fans found out with that video.

For those of you who missed it, here's the hangout in all it's glory! Okay not all it's glory as it isn't live anymore but hey look a video!

Those are the main things I learnt from my first Google + Hangout. I will hopefully take part in one a little more successfully in the future.

Hope you enjoyed this short post on my experience. As usual here's something that sums up my thoughts when I was failing miserably at Google +.