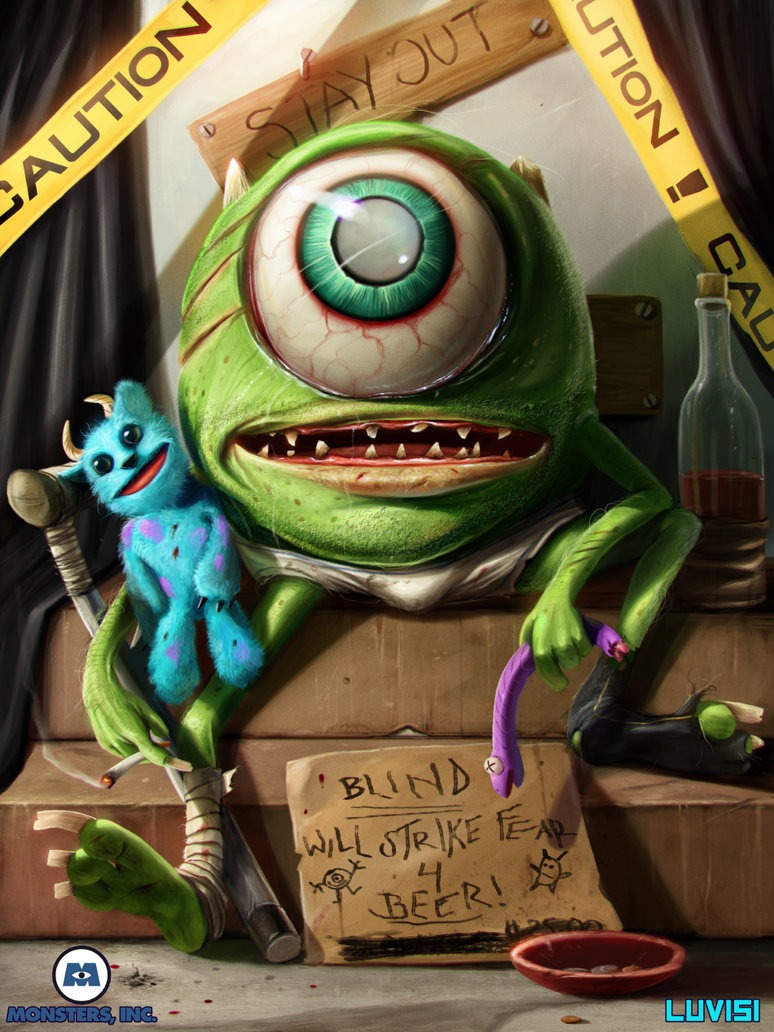 If you follow me on Instagram, Twitter or on my cosplay page you know that for Halloween I chose to take on the challenge of creating a real life version of Dan Luvisi's Mike Wazowski.

This version of the popular Monsters Inc character comes with his own twisted story:

After Boo was saved, Sully and Mike realized they no longer required scares for cash, thus forcing Mike into a new line of business; comedy.

As Mike continued his stand-up routine with the children in hopes for laughs, Sully partied and wasted money that he didn't have. The problem is: the world didn't care, it was Sully, a hero and role model. And everyone loves Sully. Everyone but the one living in his shadow.

Mike was tired of it. Tired of lowering himself to telling jokes, only to hurt himself in the process over, and over again. Mike decided to have a talk with Sully about it, but was continuously avoided. Angered, Mike followed Sully one day, only to realize he was headed for the home of Mike's girlfriend, Celia.

Mike rushed home, shocked to find the two talking. His anger got the best of him and he attacked Sully. Out of defense, Sully struck Mike, catching his one-eye. Out of confusion and anger, Mike launched his nimble body into Sully, peircing him with his horns, killing him.

As Sully laid dead on the floor, Celia screamed, blaming Mike for the death of him. She then told Mike that he wanted to surprise him with a new job, and was just talking with her to help surprise him.

Devastated, and now wanted by the Monster City Police, Mike ran. He had to go where no one could ever find him, so he travelled to the old Monster's Inc factory. Mike opened one of the Doors, and was transported to Earth to live amongst the humans, banishing himself from Monstropolis.

This is where Mike was broken, and dwelled on the city streets, among those that looked down upon him.

To this day, no one knows what happened to Mike, and no one ever will.

This story and picture were just too epic not to bring to life so I set about thinking of how I could do it starting with a drawing and then lots of research. 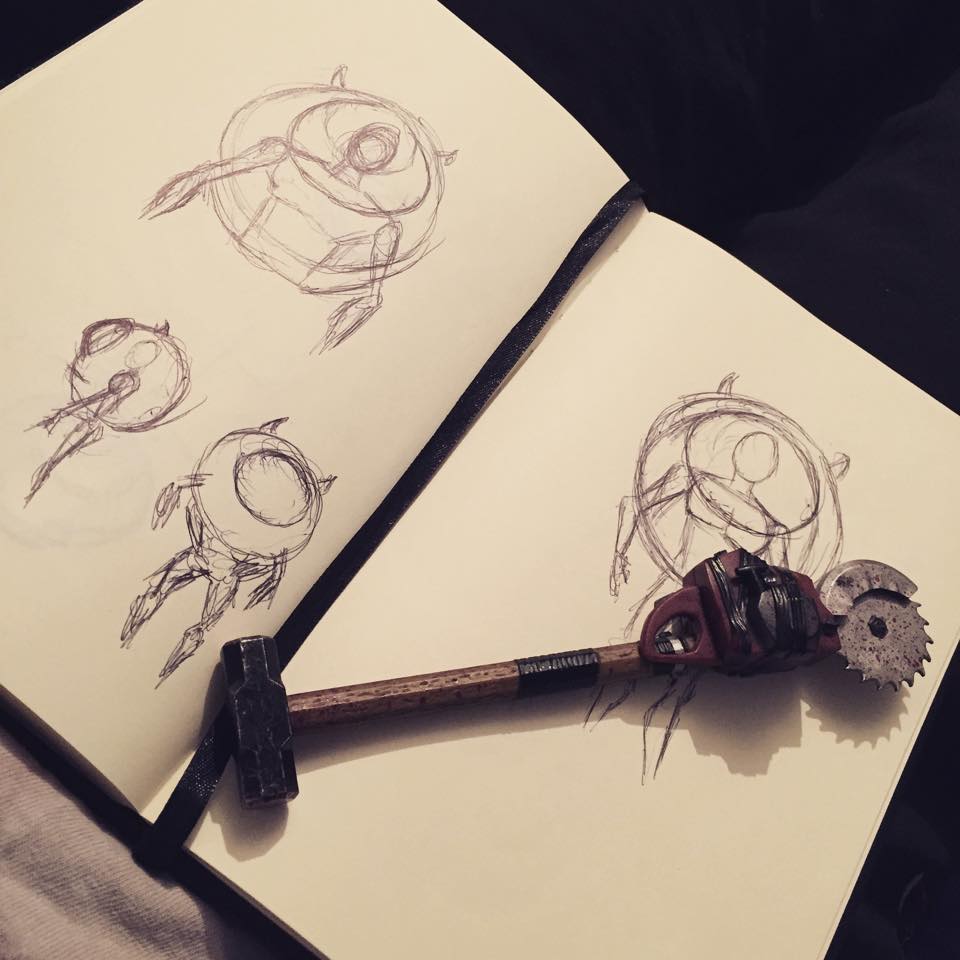 learning from my lessons with the Hulkbuster I looked first at how I could feasibly create a Mike that looked like the one that Luvisi created without having prosthetic arms that I would have to puppet.

From that I gathered that I would roughly need to make a ball approximately 24 inches across (I'm 19 across). This would allow me to hold Mike's body up with my bi-ceps and still look like Luvisi's version.

Next was to see if anyone had created one before so I could formulate a plan of what I would need. I was in luck there had been a dad who had previously created one using fibre glass. 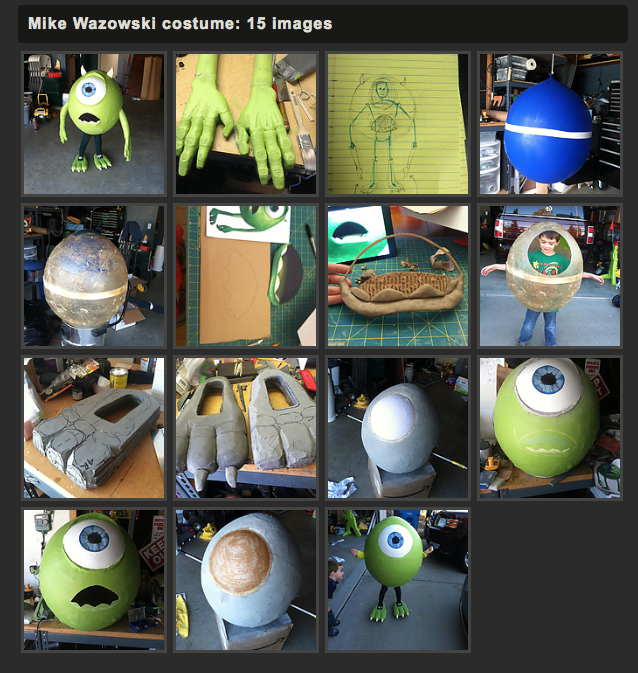 Having never used it and knowing it was probably not a smart idea to attempt using fibre glass in my room (where I would be making it in September/October) I looked for other options.

By chance Instagram provided me with the answer when it led me to Frank Ippolito who had made a kick ass Rancor for tested.com. So being the cheeky person that I am I asked him what he thought I should do, and I suggested foam fabrication and to check out the Rancor videos that were coming out on YouTube. I'm pretty sure I single handidly watched each video about 100 times trying to take in as much technique I didn't have.

He also suggested checking out Evil Ted which I had before when working with foam and building the Hulkbuster but what I didn't realise was that he also had a tutorial for patterning large costumes. Perfect for me!

So I took apart his video and the one from Commander Holly to create a plan & list of things I would need and set myself a budget for more than I would need. 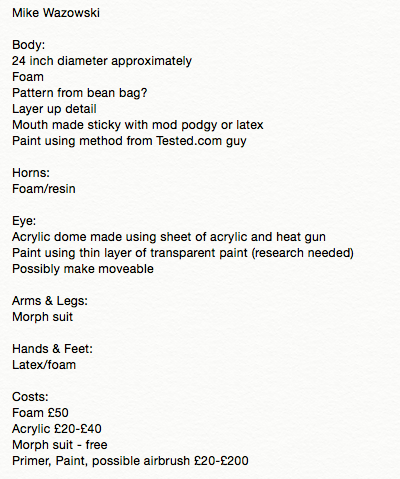 I was ambitious to say the least and also was able to get morph suit for free from my friend which was really lucky. She's awesome you can check out her costumes on Facebook.

So I set about buying the stuff and got part of a pattern printed off at work (totally legit... >_>). Then I set to work making the broad shape of Mike. 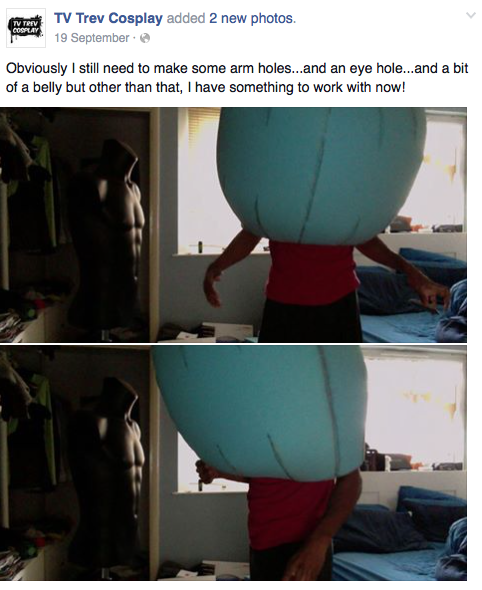 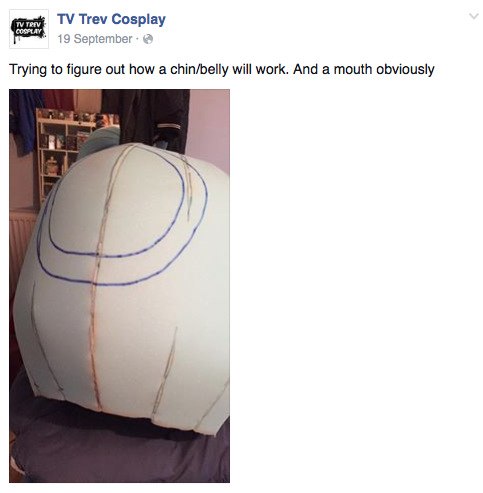 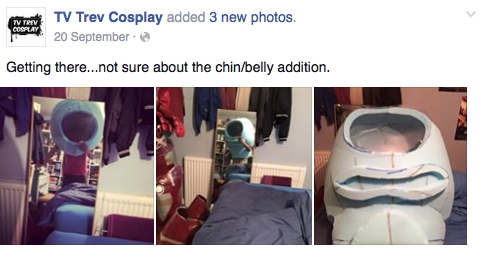 You can't really see it but the acrylic pretty much sat over the hole. The original plan was to paint it so it was opaque (like a double mirror) allowing me to see but looking like an eye on the outside. However after hunting around my local Halfords I realised this just wasn't going to work so I wracked my brains for a week or two trying to come up with a solution. I tweeted people trying to get an answer to my unique problem but I got no answers. Then it came to me like a lightning bolt. Using a dome that a friend had given to me for these purposes (not sure where she got it) when moving house I would make the main iris/pupil and create the illusion of the white of the eye (I was really good at biology at some point) with foam and a witches hat...

Yes you read that right. A pound store witches hat was put around the dome.

To my utter surprise my crazy plan worked. I would control the eye using a shoddy mask creation attached to the dome. Voila my Mike was basically created.

I scarred him using a soldering iron (I recommend doing this in a highly ventilated area...unlike me) and it came out pretty well. For the teeth I used left over Worbla that I had lying around. Finally the paint was one that I had mixed at Halfords. It's actually a Lamborghini green and is pretty much exactly the right colour for Mike. Unfortunately it stunk out my flat (again ventilation) and cracked in places before I could apply lacquer so more coats of paint were required which was so much fun...(I may have got high on fumes).

If you're going to do anything like this I would recommend doing it in a highly ventilated area if possible or a garage or a shed...basically anywhere but where you're sleeping.

This is the finished piece. I'll put together a follow up post about how it went down at the office and else where. 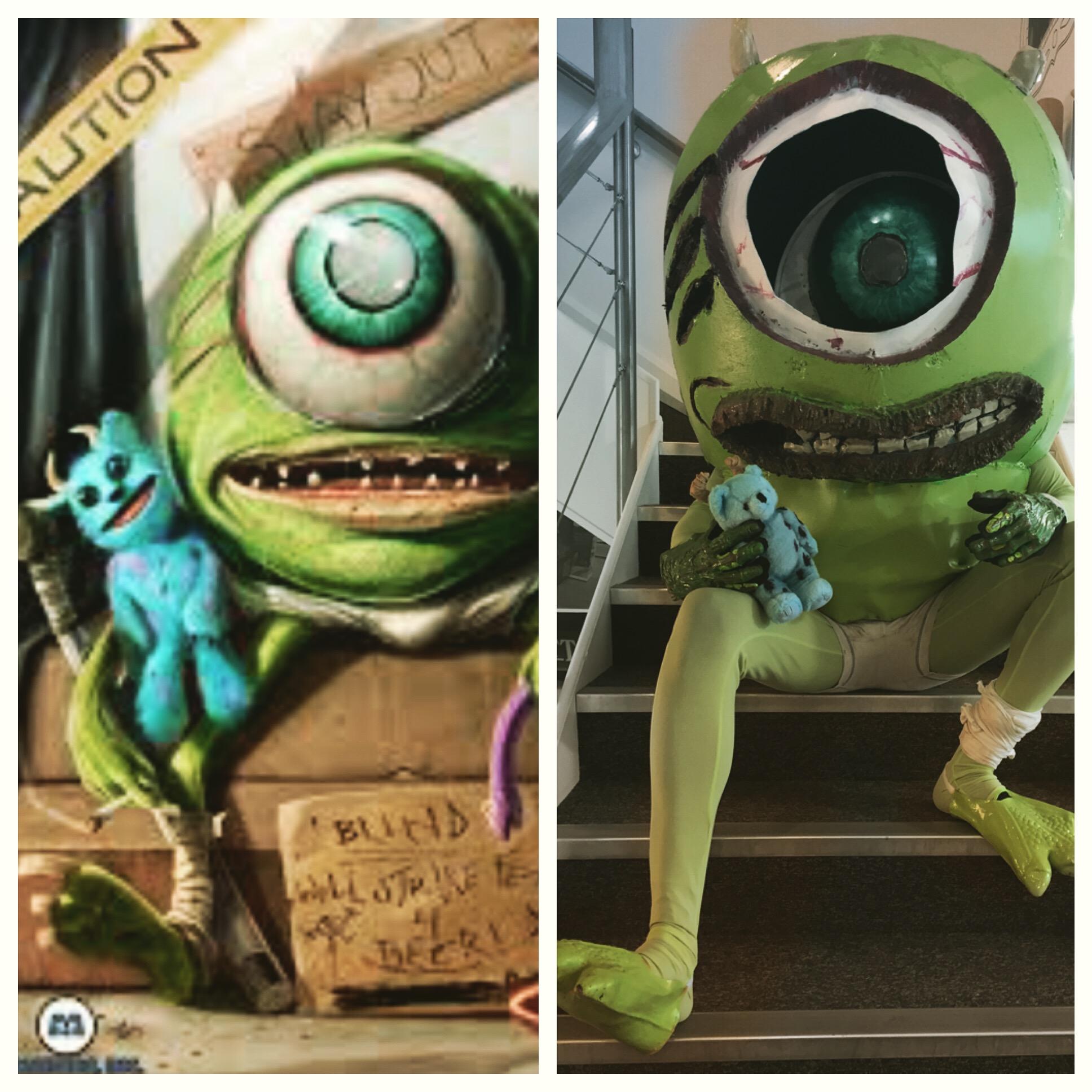