This post will be a list of the top 5 cosplays from MCM Birmingham. I meant to do this earlier in the week but work got in the way, then the plan was to do it Saturday...however I didn't plan for a hangover, malfunctioning/broken phone and to still be shivering from my dip in Birmingham's canal Friday night. That was fun. No seriously it was once I got over the whole near death experience side of it.

So now that I sorted out a new phone and got over the hangover which actually wasn't that bad I can get on with this.

If you've been following my page's Facebook feed you will have seen me share Solid Edge Media's cosplay video of the event who I was lucky enough to be next to when they were filming the footage from the cosplay masquerade so I got just as good a view if not as good shots.

Their video is a great illustration of just how many amazing cosplays there were at the event ranging from super popular film and TV characters to more niche characters and even some of people's own creation. Bearing this in mind it was a hard decision to narrow it down to just 5 from the pictures I took as well as some that I sourced from another visitor to the convention; Lorenzo Iero who got some better pictures than I did. You can view all of his pictures on Facebook. 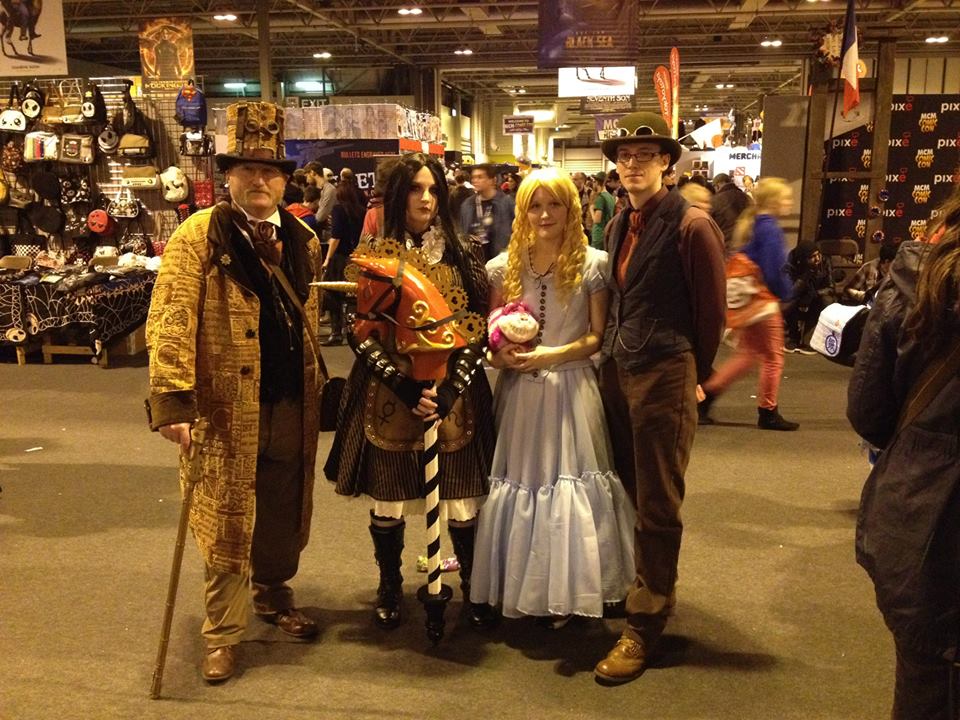 An inspired choice of cosplay if there ever was one. This group probably had a lot of fun creating their looks for this and the horse in particular must have been ridiculously fun to make looking to be based on a merry go round horse.

For those who don't know steampunk is a subgenre of science fiction and fantasy that is inspired by 19th century western civilisation. Costumes usually feature steam powered machinery and are quite intricate. MCM had a section dedicated to it this year which this creative lot probably had a blast at!

This was a Spider-man with a twist that I hadn't seen before. Having done a quick Google search I actually can't find a reference to it so I'm guessing this was this cosplayers own creation. I assume the idea is that Bullseye one of Daredevil's foes, manages to mortally wound and/or kill Spider-Man with one of his weapons of choice...playing cards. 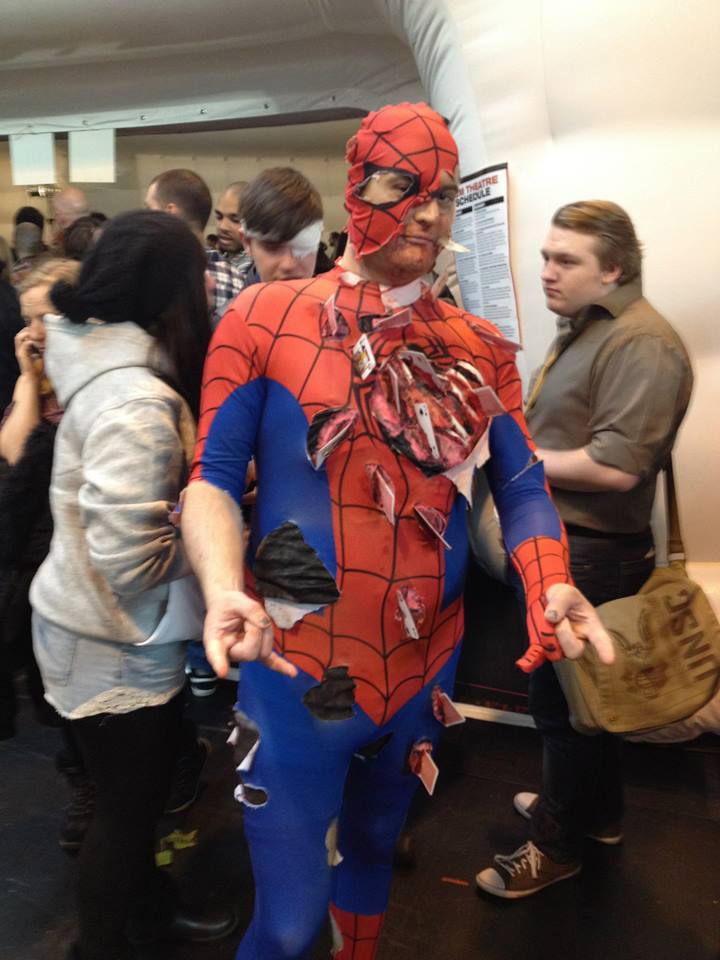 Whatever the story behind this is it makes for a very clever costume that is cheap to make and looks spectacular (excuse the pun). People should try this look next Halloween. 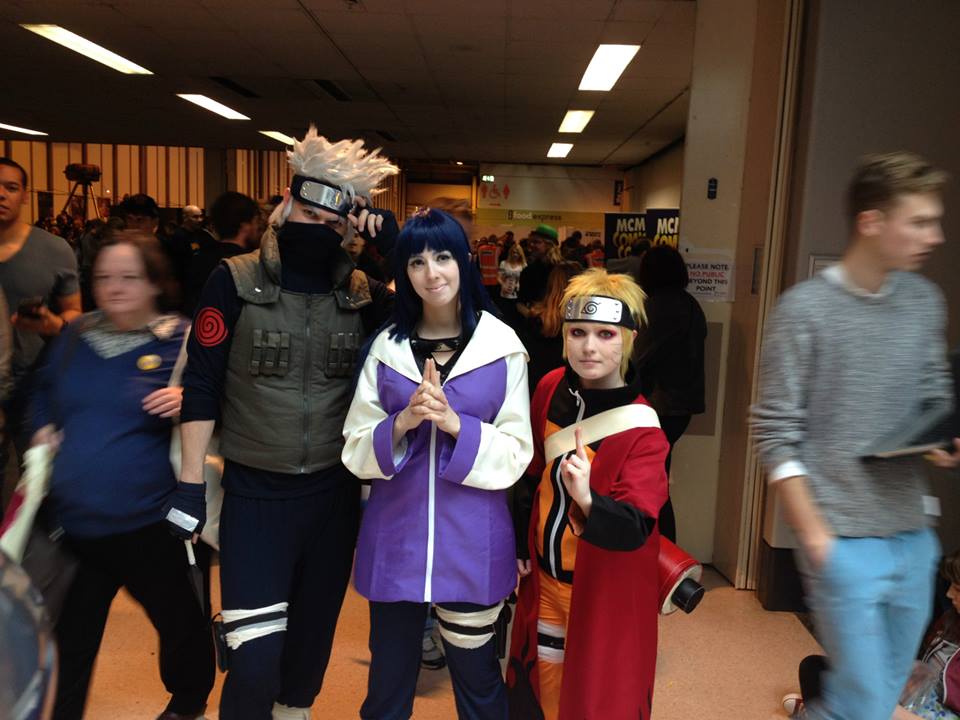 A trio of Ninja ripped right from the pages of Naruto. These three have put an amazing amount of detail into their cosplays from make-up to mannerisms they had the characters down. The only thing that's maybe missing is Hinata's pale white eyes but that would be suuuuper creepy. Also if you haven't noticed the one playing Naruto is crossplaying (girl playing a guy)...I think anyway. If not I'm really sorry for the mistake but I'm 90% sure....85%... 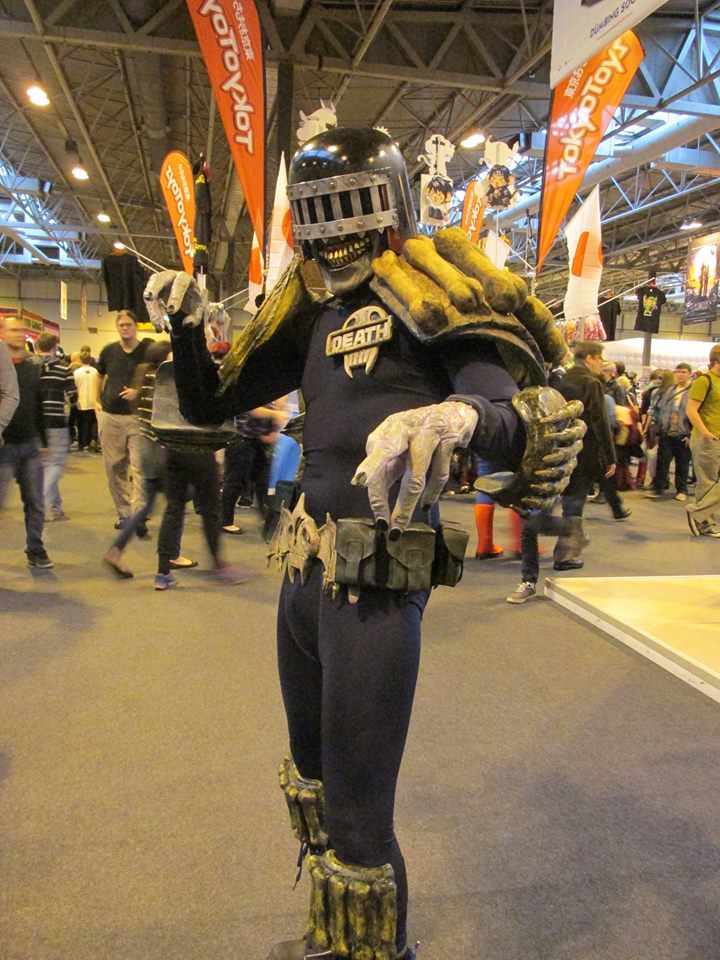 Another character that comes straight from the pages of a comic book...Judge Death. An iconic character from the Judge Dredd universe this cosplay is both creepy and epic.

Now this one I had to look up because I am ashamed to say I never watched the film that it's based on. However I could tell the level of detail that had been put into it from first glance. This guy could have been in the movie. 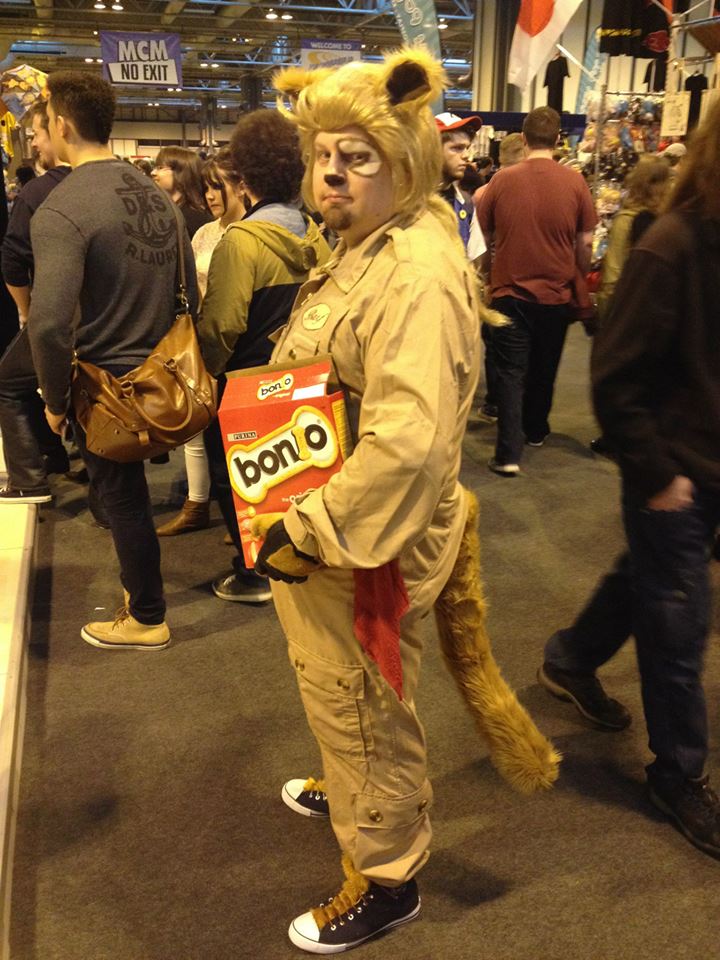 The movie is Spaceballs and yes he had gone and made some biscuits in the right shape to eat all day long. Dedication to the role.
I salute you sir.

Now it was difficult to narrow it down to just 5 but I think there's room for some special mentions of people who almost made this list. 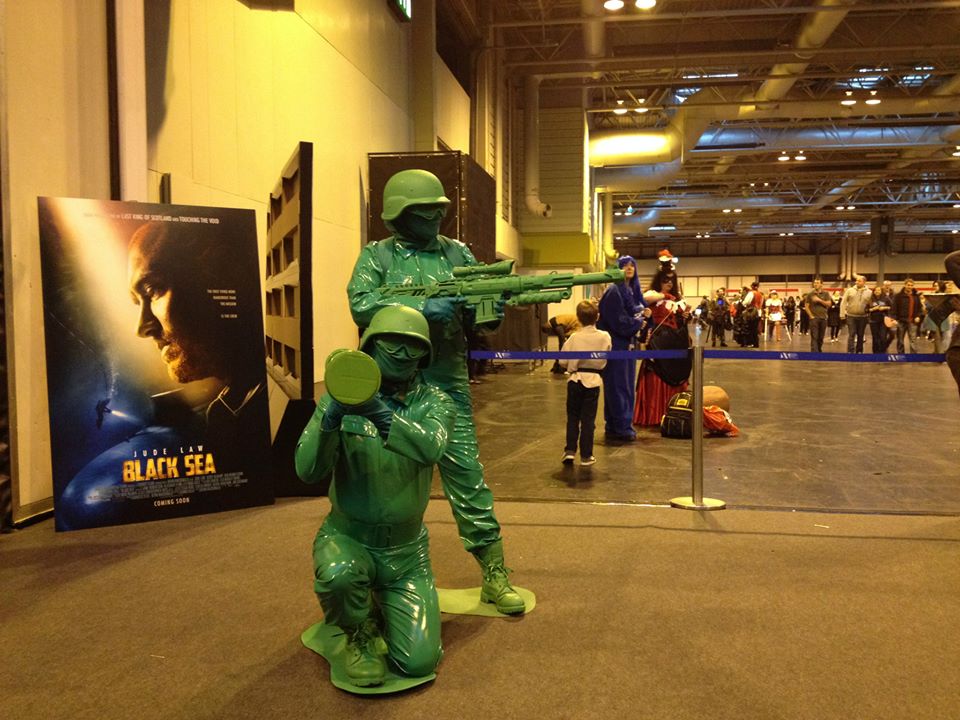 I don't know how long these Army Men stood posing near the entrance but they deserve to be mentioned for their service...to all the photographers who too oh so many pictures of them. 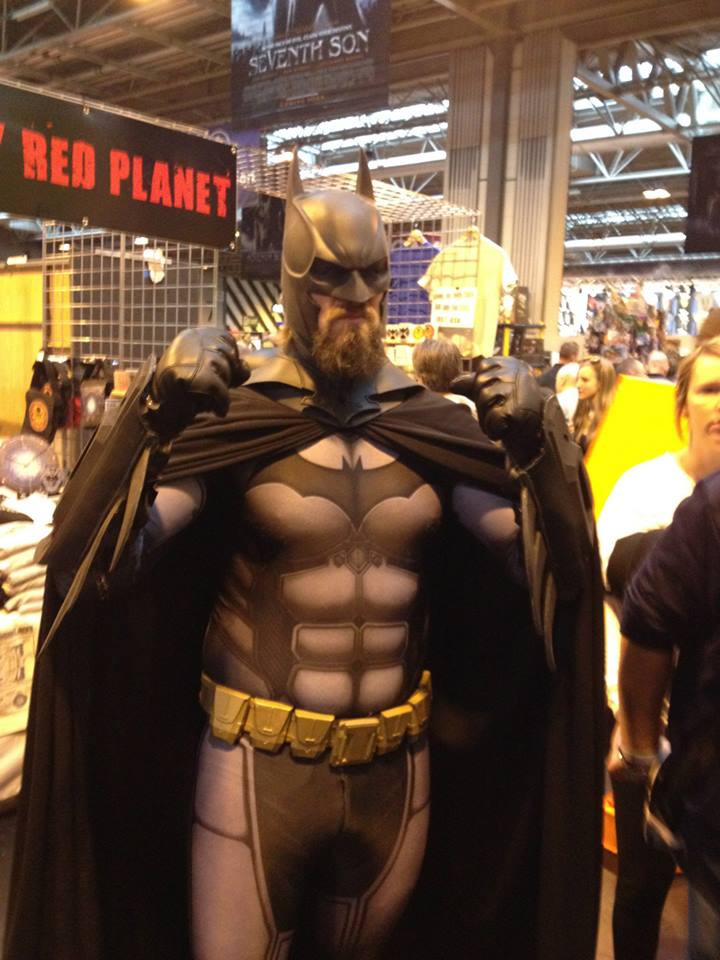 This guy spent around a grand on his costume. Money well spent? I think so...his wife might have other thoughts on the matter when she finds out. He hid it by buying the costume in bits but I think it's just a matter of time before she finds out! 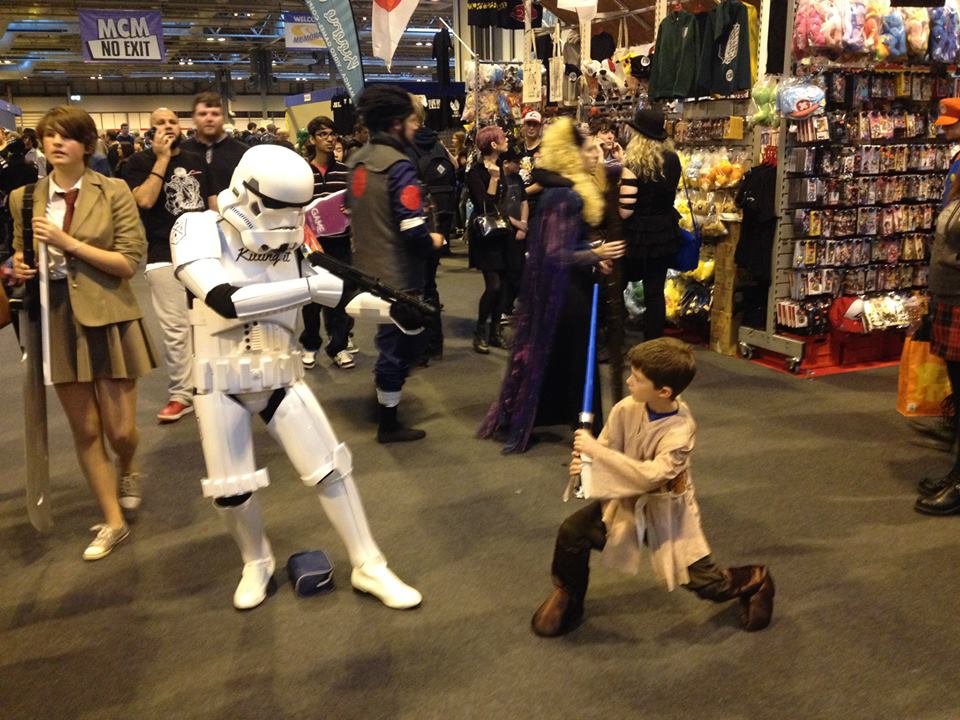 Not sure if you can see it but this Storm Trooper has the word's killing it on his chest and if that's his son with him then yes...yes he is.

So apologies it took so long for me to write this post but...life.