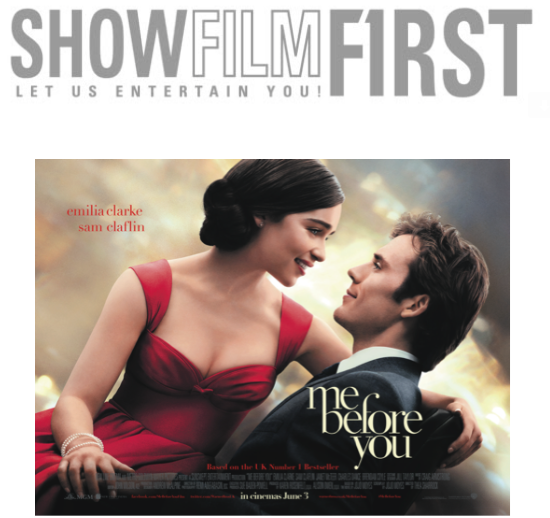 Thanks to Show Film First I was able to see Me Before You...first. Well okay not "first" but I got to go to an preview screening along with a packed cinema of other people who had been lucky enough to snag a ticket.

This was a week or so ago and I have only just got around to writing up a review but I could not let time pass by without doing a review of it. This review will contain spoilers so read on at your own risk if you haven't read the book already.

The film takes on a very challenging subject and presents it in very honest but romanticised way.

For those like me who haven't read the book the story follows two young characters in the English countryside. One is Louisa “Lou” Clark (Clarke) a quirky and creative 26 year old girl with no clear direction in her life but with a strong desire to help her tight-knit family make ends meet.

She gets introduced to the second main character when she takes a caregiver job at the local “castle” to be a companion to Will Traynor (Claflin). Will is a wealthy young banker who ended up in a wheelchair after an accident two years before she started.

The story follows their adventures as Clarke's cheery nature eventually wears the poor boy down so that he has to accept that he's stuck with her. Okay not quite like that (it's exactly like that).

Unsurprisingly since his accident Will is not a cheery soul and has made a deal with his parents to live for another 6 months before they allow him to die. Clarke doesn't know this going in and when she finds out instead of giving up hope she gets it into her head that she can change his mind.

Yes this is a tear jerking tale to say the least (I didn't cry!) but it does present the issue of euthanasia, suicide, disability and being a carer quite well. Although the fact that Will is a very well off man means that he does not have to worry about the usual issues that might plague a normal disabled person. He has parental support, all the money in the world (literally a castle), an electric wheelchair, a car made for his wheelchair, a personal physical therapist, private health care and most of all Clarke, a person who apparently would doggedly not give up on him and somehow ends up in his will. Yes it presents a lot of issues well but also magics away others with the fact that the character has money.

Ignoring that small annoyance I quite liked it. The story is predictable but the acting of the two leads drag you in their budding romance as you will their connection to blossom into what it is at the end (which is why it's so tear jerking!).

If you can bear the anguish of the end I would fully recommend popping into the cinema to see this.

Bring some tissues though...