Unless you've been living under a rock for the past 4 years you will have come across the film Despicable Me and will have been introduced to the creatures quite rightly named...Minions. Clearly created with the intention to be endearing to children Minions as well as adults they quickly grew to be more of a fan favourite than the main character of Despicable Me; Gru. This led to the sequel having a story following them more than Gru.

Minions (for the uninitiated)

The spinoff Minions is the natural evolution of the franchise and the characters as it is clearly what fans want as what can only be called Minion-fever takes over young and old with the mere mention of them. They are the equivalent of Winnie the Pooh and Tigger back in the day (remember them? God I feel old if you don't...).

Like pretty much any film released these days with a budget behind them, a website has been created for the film. Most film sites however aren't as interactive or filled with content as Minions' is. 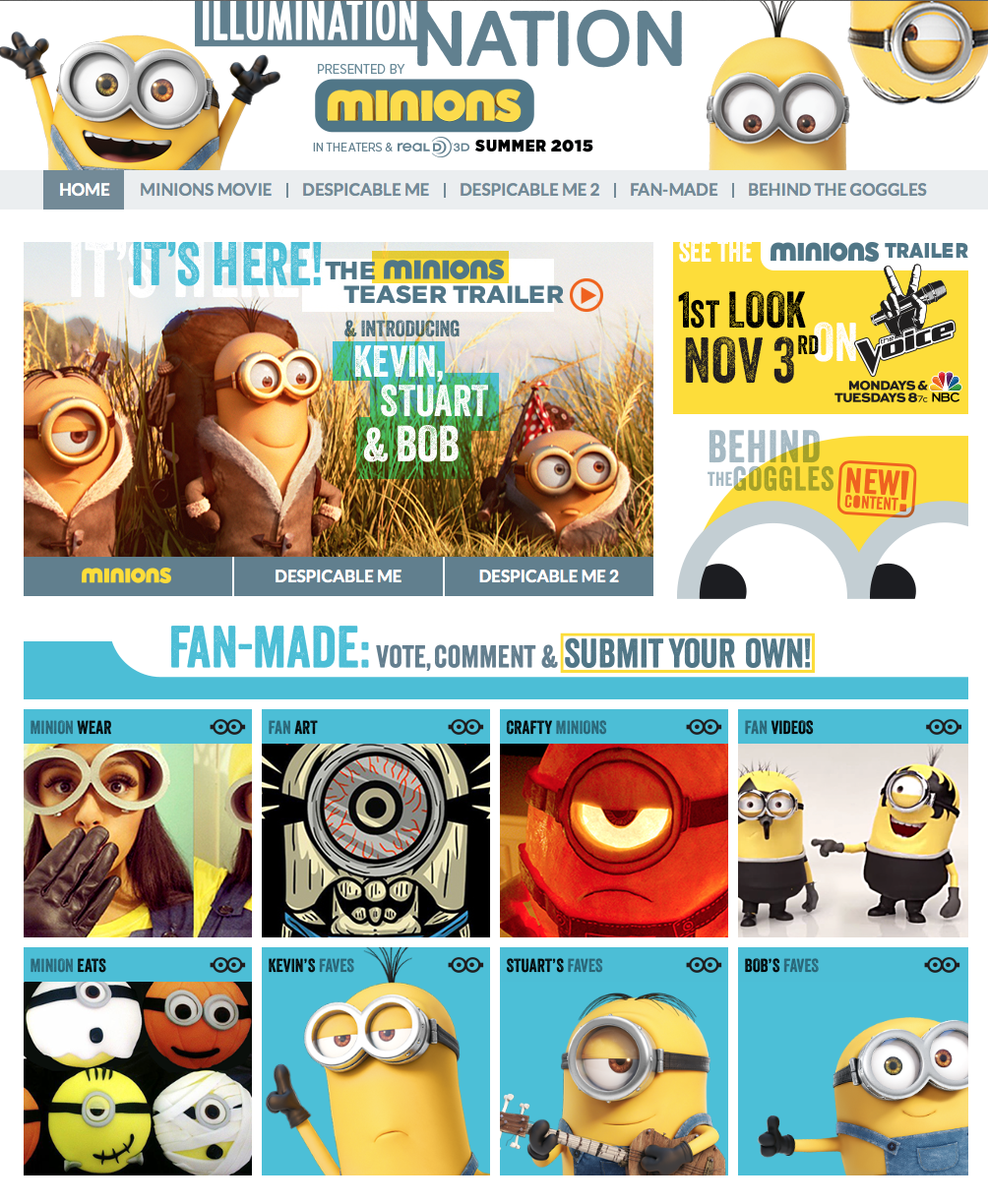 In particular fan created content which is rare for a film that hasn't even been released yet. This helps to give the film social proof that it is something that won't want to be missed, a cultural phenomenon. This is of course just the tip of the iceberg with fan creations as there is likely a constantly updated stream of user generated content.
As can be seen on the home page fan-made content is encouraged with a voting system which will presumably lead to a prize of some description for some. 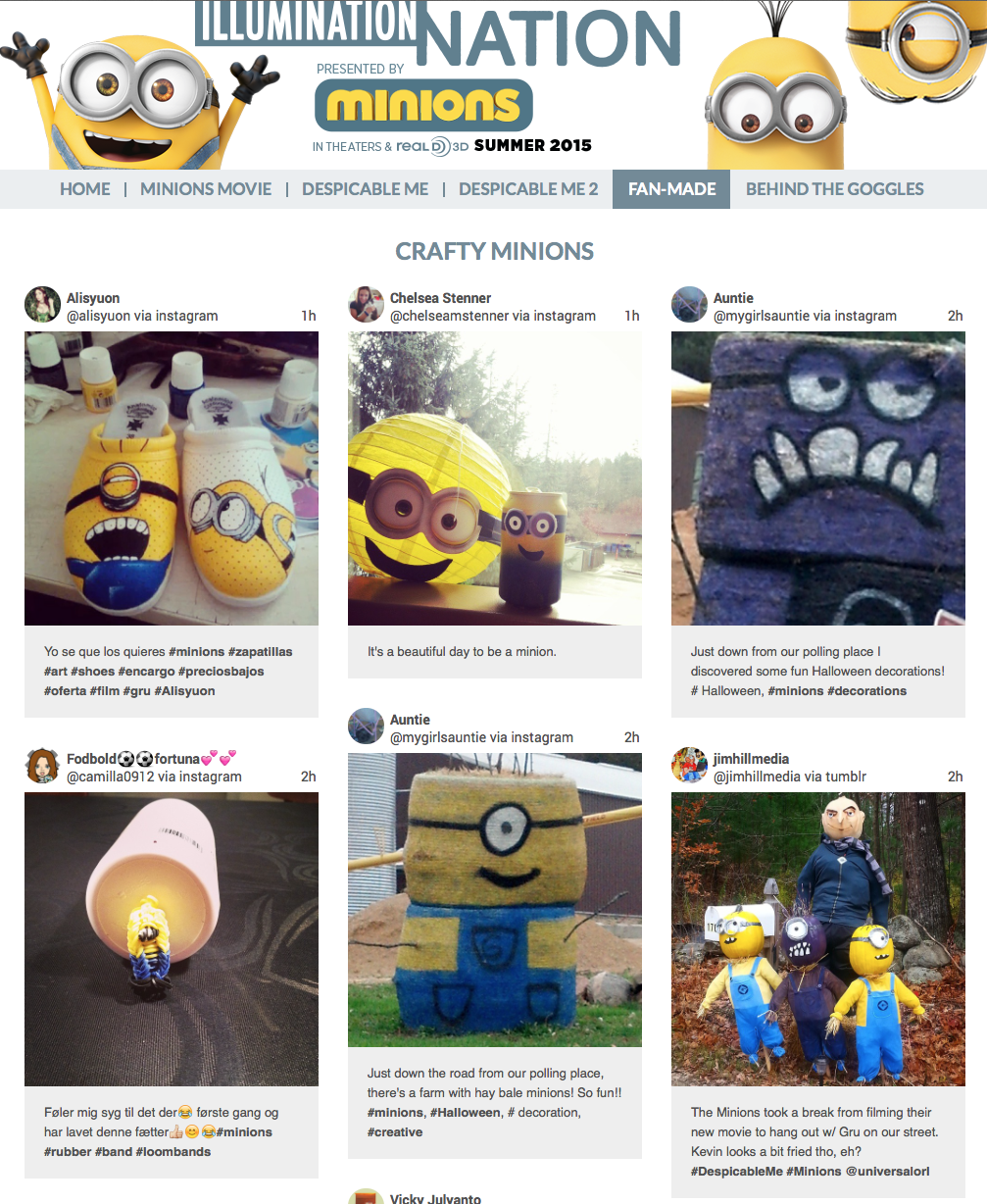 The trailer at time of writing has had over 1 million views and was only released a day ago. The Facebook page has almost 26 million likes and Twitter has 106,000. Instagram on the other hand only has 25,000. Their efforts to create buzz around the film will clearly focus on their massive Facebook following over the next few months.

To put it in perspective of just how popular the Minions are and how this film could be better than the original film, Despicable Me only has 17 million likes. This is after 2 films.

As a marketer I found the difference in creative between the UK Facebook vs US. Presumably this indicates there might be minor differences in the film's cultural references as was done in Captain America. This is at least my hope as it would make sense with the way Minions language is almost universal. Maybe the origin story will be differ depending on where you watch it? Maybe I'm just seeing possibilities where there might be nothing. 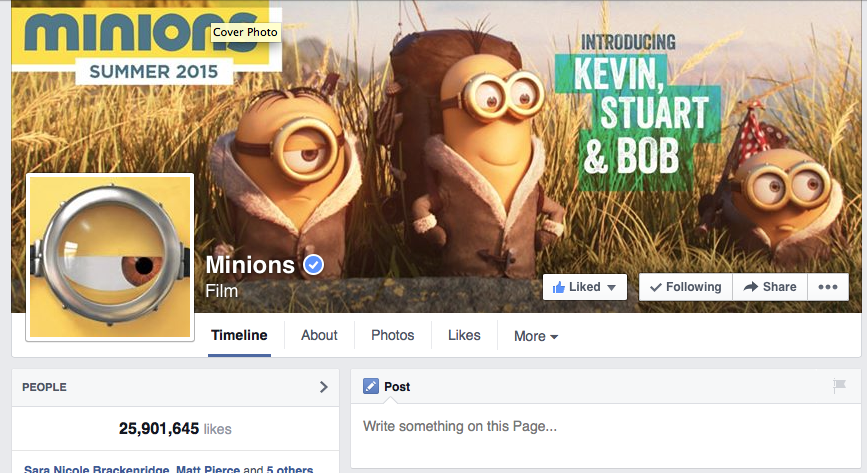 In any case like many others I can't wait to see this film especially after seeing the trailer. If by some miracletragedy you haven't seen it watch it below!

This post is inspired by a discussion that took place a few minutes ago as my friends and I decided how we would watch what can be considered one of the most influential anime films ever. As most of you can guess this film

As my self given name suggests I love a good TV show and over the past few years the content being produced for television has consistently got better and better. So much so that the fandoms created by them rival those seen by Movies.