Battle was the theme for the November Crate and that's exact thing I had with getting hold of my November Loot Crate. To say it was late is an understatement, it only came yesterday and that was only by chance after Royal Mail screwed up delivering my package and a good samaritan who had received it decided to be kind on Christmas and deliver it to me (as he could read!). This was technically my second November crate after the first one got lost!

It appears I was not alone in this as November till now Loot Crate seemed to be handling a higher than average number of inquiries so getting a replacement sent to me took longer than expected. This was only after numerous messages on twitter and via email. I will not be surprised if my December one (which is also a little late) comes tomorrow. But I'm happy to wait as I know it will be good (because of all the bastards who've posted pictures already).

That's enough of a rant from me on my battle to get my crate and now on to the crate itself which was...well worth the wait.

I won't beat around the bush about what was so special regarding this crate. It was the whole battle element of it, drawing from classic arcade fighting games the great people at Loot Crate decided that November's crate design should involve a little more creativity than usual. They tell Looter's this from the get go of opening the booklet that comes with the crate and immediately gave instructions for what should be done with the box. The instructions were simple to follow and the resulting creation was well worth the effort. 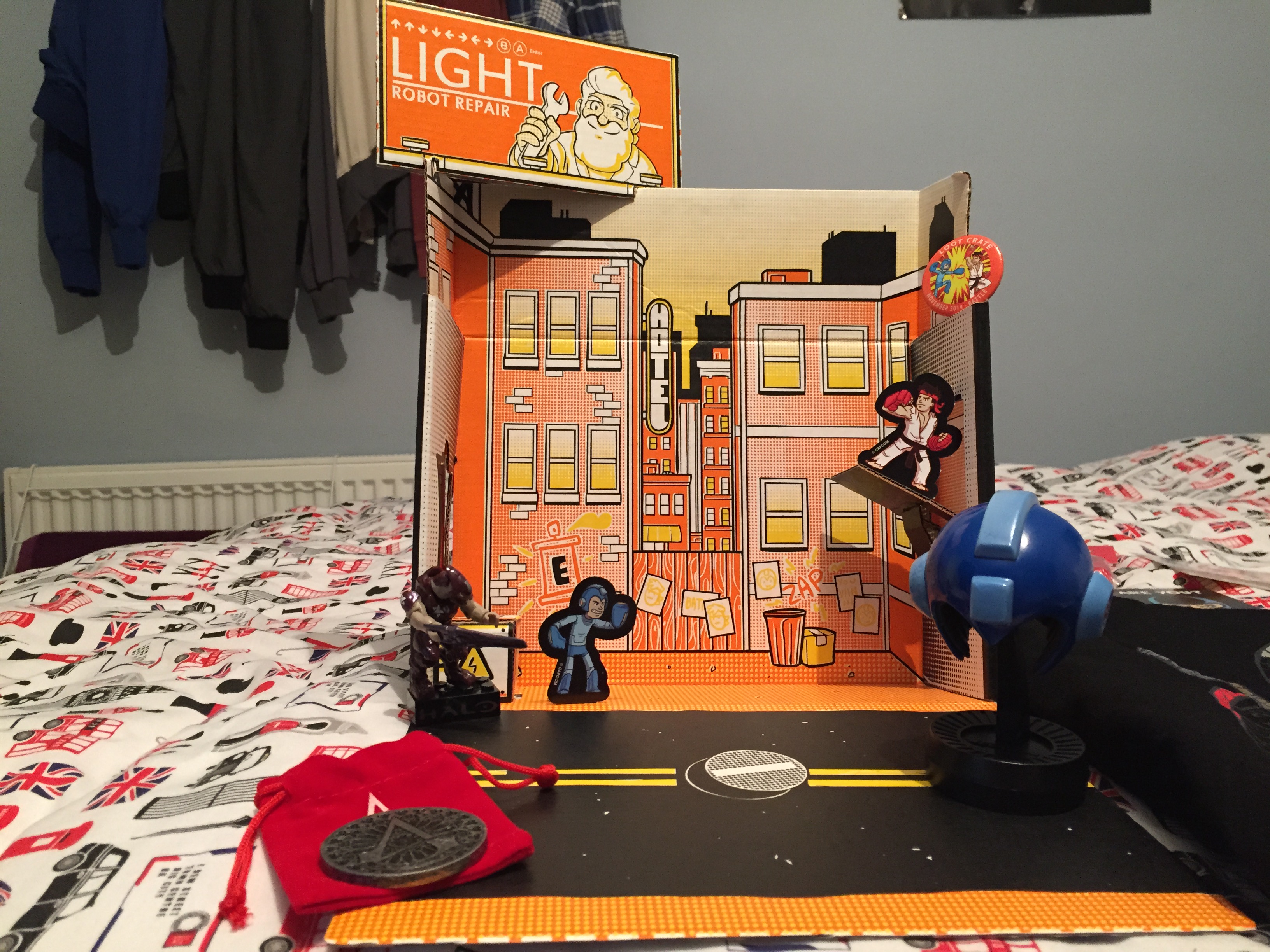 As you can tell from the picture above the crates battle theme drew on classic arcade games Megaman and Street Fighter creating a what if scenario of who would win in a fight and a stage for where this would happen. As part of the lead up to the crates release Loot Crate also created a pretty awesome video teasing the confrontation.

Needless to say the crate included an item centred around each of the characters featured in the video. As you can see from my earlier picture I got a mini Mega Man Helmet. This was a product from Capcom that came in 4 colours (as Megaman had a tendency to change colours for different powers). Out of the 4 (red, green, blue and brown) I got the one that Mega Man is most commonly depicted in Blue which is exactly what I would want if I was given the choice. I kind of got lucky in that.

There was also a Halo figurine and a pretty epic Loot Crate exclusive in the form of an Assassin's Creed IV Unity coin with a velvet pouch.

Then continuing with the battle theme I got another free tshirt depicting a battle as old as time itself. I'm talking about the one that rages on between Pirates & Ninjas of course. As expected I will be wearing this tomorrow because it's pretty badass.

But this crate wouldn't have been complete without the one thing that everyone coveted as a child...a headband. Not just any headband either. Ryu's headband from Street Fighter. I kind of got a little too into the character when I tried mine on for size...

Overall I'd give this crate a solid 8 for ingenuity but I'm still disappointed it took so long for it to get to me.

I'll play about with my crate some point soon in the future so I can see who wins...