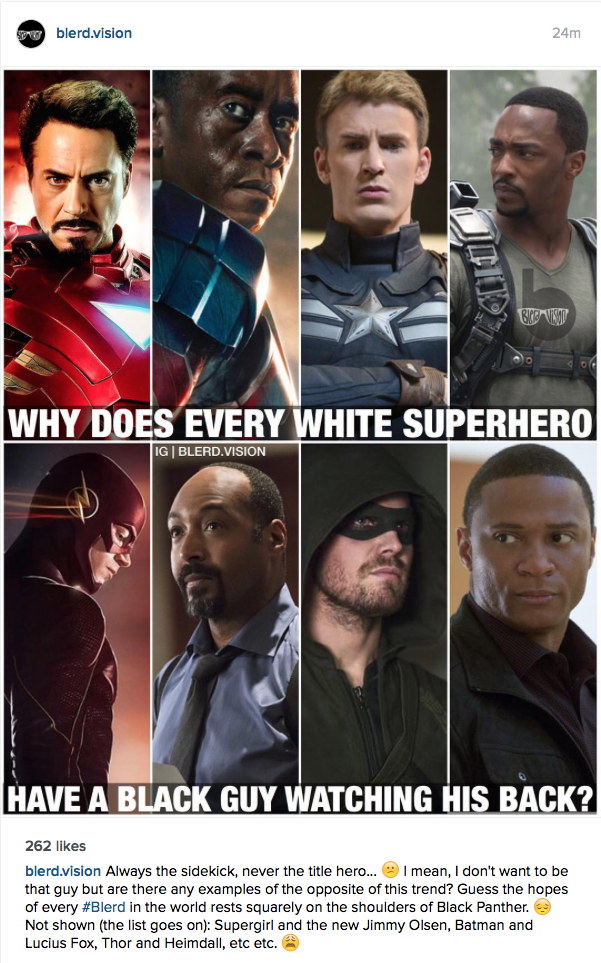 I spotted the above post on Instagram a few days ago and I couldn't agree more with the question on the image or the caption. There is a distinct lack of black stand alone heroes in film, television or comics and I really don't know why.

In film and TV the only black hero we've seen is Blade, who at best is an anti-hero and not really the best example of heroism. At a push we have Shaft a leather coat wearing bad ass who slaps prostitut...yeah he's not a hero. Then there was Spawn's film which we all try to forget...

I almost forgot about the one true original black super hero film, Hancock. Remember that? Will Smith, superhero, it was a no-brainer this will be awesome! No. This was kind of awful. The story kind of sucked, he was a depressed drunk and worse of all he didn't have a good villain...it was bad. It was entertaining but it was bad.

However what's worse than the fact that there being a lack of stand alone black heroes is the fact that any that we do see are practically side kicks as illustrated in the picture above.

I for one can't wait for Black Panther to come out and hopefully do justice to the legend that is t'challa who is practically a black batman but better. A king of his country, as strong as Captain America if not stronger, rich as hell and smart as a whip. If that doesn't inspire greatness then I don't know what will. However if they con't deliver a good interpretation of the story or the character it will all be for nothing and we probably won't see another black hero for years.

The thought of a black Spiderman has been entirely taken off the table for the big screen. Miles Morales is an established and popular incarnation of the character in the comics who has even debuted in animated form but somehow the decision was made to not have him as Spiderman even after so many different incarnations of Spiderman on the big screen.

It's highly unlikely we'll ever see an Iron Patriot/ War Machine film as the fan base just isn't there with the lack of story thrown to his character in the MCU.

Another ray of hope other than Black Panther is Luke Cage. I have great faith in the way they'll handle Luke Cage after seeing the other Marvel shows especially Daredevil and the trailers for the upcoming Jessica Jones who looks badass. Netflix and Marvel have done really well in bringing the shows and films to life, I just wish there were more stand alone heroes of colour.

Hell even better than bringing them from the comics it would be awesome if someone wrote a script for a black hero or a hispanic one or an asian one.

I really hope, nay I pray to all the gods that Luke Cage and Black Panther are the legends on screen as they are in comics.