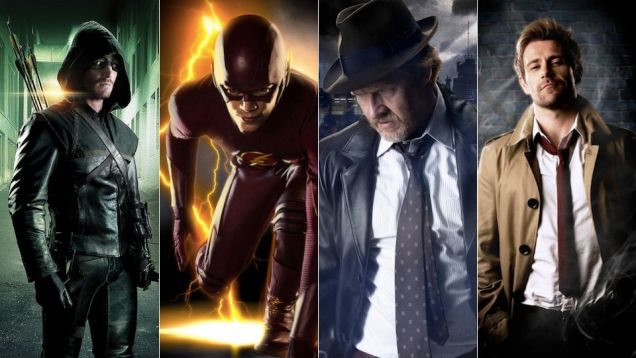 Let's be honest for a second. TV has had more than a few mistakes in it's journey to creating semi-believable superheroes. In the early years there were some unfortunate abominations that made it onto screen like The Incredible Hulk from the 70's/80's and the unfortunate first incarnation of The Flash. However there were some sparks of TV genius that came about in the early years of TV superheroes that showed some promise like Wonder Woman in the 70's and Batman in the 60's. All the good and bad led to what we have today on TV; which is what can only be considered some of the best TV superheroes ever as the studios finally commit to the source material (well as much as they can).

The vanguard for the new age of TV superheroes as comic geeks take over TV CW has without a doubt created a hero that has a solid base in reality with Arrow. Stephen Amell and co do a great job in presenting a stunt heavy show that works amazingly well. Their behind the scenes videos show off all the hard work that goes into each episode and fans love it because they can see just how hard these actors, stunt co-ordinators and directors are working to produce a show as close to the fictional reality as possible.

The moment that really brought the character home and gave a silent nod to the comics recently is the use of a boxing glove arrow in a fight. I couldn't help but smile when I saw it happen.

The boxing glove arrow is a commonly used weapon used by Green Arrow in the comics & cartoons and just shows how much thought the people behind the show are putting into it to not make it a silly trick arrow and root it into the comic while staying true to the show's mythos.

I've never personally read the comics but from what I've gathered there isn't much deviation from the comics character except for the fact that he doesn't smoke in the series (for obvious cultural reasons) and the fact that his accent isn't as English as it could be.

The show itself is pretty decent and easily holds it's ground against other supernatural based shows like Grimm, Once Upon a Time and Supernatural.

Reimagining the story of Batman has been done again and again however this is a refreshingly new take that focuses more on James Gordon as he rises through the ranks as well as a young inexperienced Bruce Wayne fresh from his tragic beginnings.

After a shaky start the show has really picked up as Penguin has started to become more of the villain that we know and loveloathe.

I won't ruin the reveal but if you were having doubts about the show and switched off a bit early into the series I'd give it another go.

However the true proof that TV is starting to crack the comics has to be The Flash. A show filled with so much hope and intrigue it's impossible not to love it unless you're a heartless bastard.

Who doesn't love the story of Barry Allen??!

Not only is the story good but as the series continues they're becoming ever more inventive with how they show off this speedsters main asset...no not that! I'm talking about his speed.

Blink and you miss it.

This truly is a great time to be a superhero on TV with special effects, costumes, stunt co-ordinators and most of all studio backing, truly great shows are being made and the fans love it!