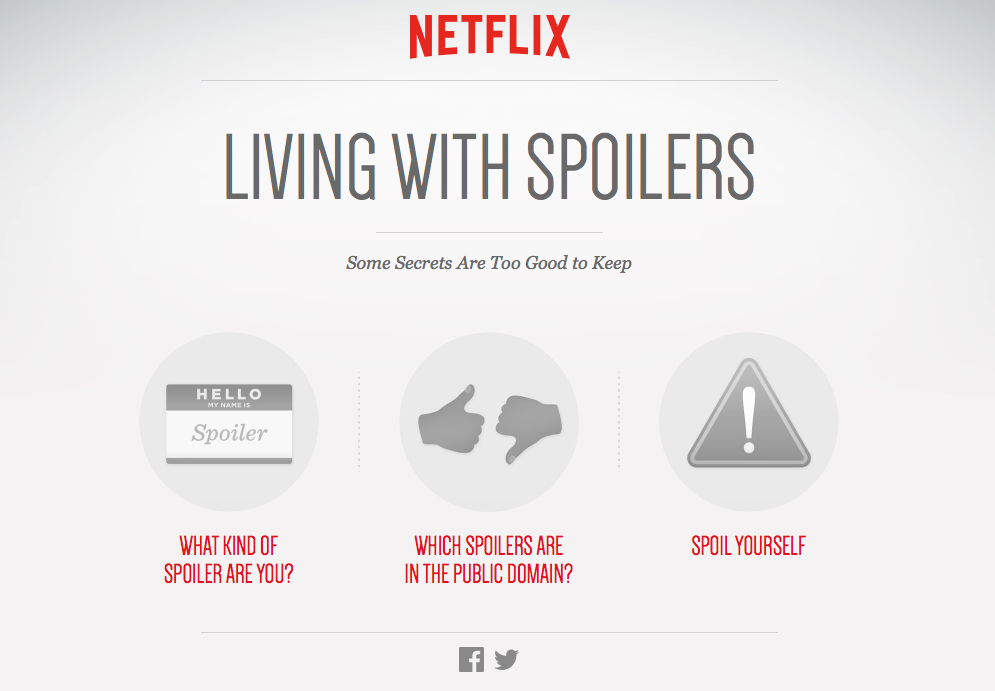 To those not in the know or rather who don't have a feed full of TV and movie related stuff, you might not have heard the great/terrible news that Netflix has created a site to torture those who hate spoilers with a passion and to make those who enjoy inflicting them cackle with glee at the power they now wield.

The site is as you can guess called Living with Spoilers and looks like a way to educate people a little about them with 3 main sections:

These are pretty self explanatory but I'll go through them.

What kind of spoiler are you?

This is a flow chart for people to identify what sort of spoiler they are. As part of the promotion for the fall season kick off along with this Netflix also commissioned a survey around peoples changing attitudes to spoilers and found people care less now. I guess this means I can care less about spoiling stuff for people too right??

Based on them depending on the situation I would be a mix of Coed and Power spoiler. Others like my friend Jonathan known for his accidental spoiling of series for others would be an impulsive spoiler.

Which Spoilers are in the public domain?

This section gives an idea of what spoilers the public (US mainly I think) would say are common knowledge now.

Finally this section gives you a chance to watch random spoilers. I almost screwed myself with a Pretty Little Liars one when I'm about a season and a half behind.

I think this section is what has people in a tizzy because it's just TOO DAMN TEMPTING!!!

This isn't the first site to have spoilers as their stock and trade, Perez, sidereel and SpoilerTV have been doing it for years. This is just a new format. As long as you know where to look for reliable spoilers then there's nothing to stop you but your own self control.

Why Netflix why would you create this awesome/brutal creation. The temptation may be too great.