One of the freshmen comedies of the summer You're the Worst's dark but rooted humour has been a welcome change from the normally upbeat and unrealistic nature of sitcoms. Yes this comedy too was set in a world of extremes. Situations that generally wouldn't happen to normal people. However it was just that little bit darker in nature.

This shouldn't be surprising seeing as it came from creator Stephen Falk who had a mentor in Jenji Kohan who is the creator of the popular but twisted shows Weeds and Orange is the New Black. The effect on his story telling is evident as the tension of holding back big moments is gone and replaced by real and raw situations.

The show is based on 2 urbanites who end up together even though (as is a symptom of the age that we live in) they try their hardest to avoid it in the most fucked ways imaginable. To me the show is like a stand up routine in a way, the jokes or rather the situations either hit you or they don't.

Most comedians have a way of telling a story or having an overarching theme to the jokes that they tell on stage. You could say sitcoms follow a similar pattern however a lot of them have a laugh track or certain nods to the audience that just says to them "there's the joke". This show's entire basis however is the idea that all situations (in life and dating) have the capability of being funny. It's completely frank and open about sex, the situations you find yourself in, the conversations you have as you try to define what exactly it is your relationship is with this person that you're seeing every other day. 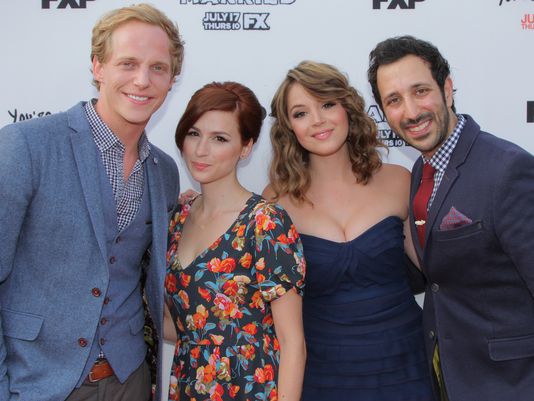 The cast in the show are perfect for their roles. Chris Geere a British actor plays the lead Jimmy. Aya Cash plays Gretchen his love interest. Desmin Borges and Kether Donohue play Edgar and Linsay; the friends. These are the 4 main characters with various supporting characters and it all just works.

I'd like to write more but I need to watch Gotham before I'm too tired. Trust me just watch it, it's as good as a British sitcom which is (usually) the only type of British show I really rate. If for nothing else watch it for the excellent choice in intro music which I think is another thing that Falk learnt from Kohan, a good intro can set the theme for the whole show.

To sum it up. You really are the worst if you don't watch this.

Okay maybe not that far but still...