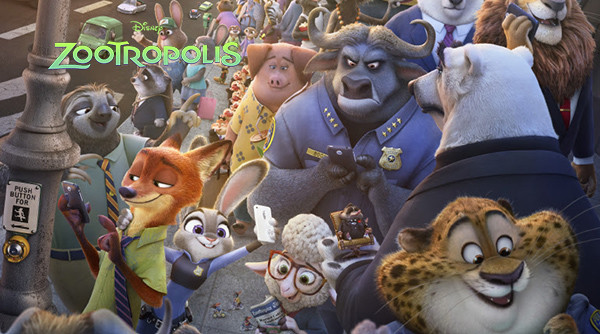 Thanks to Den of Geek I was able to see Disney's new film Zootropolis aka Zootopia a week early at The Electric and I'm so glad that I made the time to do so as it was the perfect film to watch on the International Day of Happiness and on a man date (as I could not find anyone else to go with).

The first thing I have to talk about needs to be the audience, as this was a kids film, unsurprisingly there were a large percentage of kids who were in attendance with their parents. I was one of the few young adults who didn't have a kid (not odd at all) but that just meant I could drink my beer without having to control a toddler. Win.

In all seriousness though, with such a mixed age group it was great to see that everyone - including myself - had such a good time watching it. The team at Disney knew that parents would be watching so very cleverly put in references to The Godfather, Breaking Bad and even other Disney films.

Through and through this is a film for all ages so I don't think anyone should miss out on seeing this when it comes out properly 25/03/16.

The basic plot of the film is:

‘Zootropolis’ is a city where all animals live together peacefully – predator and prey. It's a world where humans never existed (or got wiped out).

New to the city and to the job, the first rabbit police officer Judy Hopps must prove her worth. She teams up with Nick, a fast-talking fox, to uncover a conspiracy.

It's a buddy cop scenario wrapped up in disney animated fur...and it works! The main character goes through a different take on the Hero's Journey (to an extent) going from her "small town" (she has a few hundred siblings!) roots to the big city and has a series of misadventures before catching the bad guy.

For me some of the best character interactions were from Judy and Nick's endearing relationship which has some great messages on co-habitation and anti bullying but also was really quite deep for a kids film (hidden behind lots of laughs...obviously)

The animation of the film is yet again amazing, little quirks for how characters approach situations are immediately taken advantage of from the big movements of a panther pouncing to the little nose twitches of Judy's nose and ears as she enters a new room.

The way each animal acts was clearly thought out so that they would act like animals as well as humans. The idea that this is a world which evolved without man is key.

Zootropolis is something that could only happen in this fantastical world with a city that harbours multiple climates the city is a virtual Utopia with every animal catered for to an extent. Yet there's still crime so thank god for Zootropolis' Police Department which included one of my favourite bits of animation from the film a fat cheetah (I can only imagine the fun that the animators had creating that character).

However my favourite piece of animation has to be...the sloths! These slow moving characters for some bizarre cruel reason were put in charge of paper work at the DMV and were clearly a dig at their real life counter parts.

In summary the film is well worth going to see when it comes out at the end of the week whether it's with a kid you have lying about the house (please don't grab a random kid to see the film that would be odd...maybe kidnapping), a friend, a date or like me a man date. Hell you could go on your own and it wouldn't be odd, (it's 2016 people!)

At the very least it will keep your kids entertained for a little while.