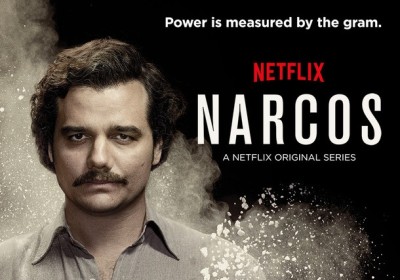 We're a society obsessed with gangsters...as entertainment. In real life we cannot stay far enough away from them however as a form of entertainment they are rich in two things we crave : story and spectacle. So it should come as no surprise that Narcos, the new Netflix series is nothing short of a masterpiece of television. While not in the same league as Breaking Bad, Netflix has done well in choosing a great story to tell in Narcos which follows the rise and exploits of one famous Columbian who even now more than 2 decades since he fell is still notorious infamous famous for his deeds in Columbia and the effect they had in the United States (if not world wide).

I'm of course talking about Pablo Escobar played by Wagner Moura, the head of the famed Medellin cocaine cartel of the 1980's.

The drama depicts the rise of the cartel run by Pablo Escobar and the drastic efforts DEA agents Steve Murphy (Boyd Holbrook) and Javier Peña (Pedro Pascal) take to capture him.

It's hard not to think of the series like Goodfellas as a TV show. Ignoring the obvious similarity in context, the first person narrative from DEA agent Steve Murphy. While he narrates it the focus is on both the bad guys and the good guys. Unsurprisingly our definition the line between the two starts to blur (more for whether the good guys are actually good).

I watched all ten episodes over a day (after being forced to take the rest of my holiday from work) and I don't think my time could have been spent more wisely. The story unfolds slowly and beautifully, dragging you deeper and deeper into Escobar's world. While it could have easily messed it up and gone overboard with some scenes, there is a certain finesse that is used throughout to bring out the best in the series. Wagner is unbelievably good as the infamous drug lord going from strength to strength and the characters around him are just as good.

Anyone that loves gangster films (so everyone) will love this show. However you should be aware subtitles are used throughout the series and while I'm used to them there is a limit for how long you can concentrate on reading them and I will admit that at times I did miss some bits due to tweeting, texting (whoops). So if you are going to watch it learn from my mistake and put your phone on airplane mode while watching and possibly split your binge up so your concentration levels are kept high.

You can see the trailer below if you haven't seen it already. I'm sure you'll want to watch it as soon as possible.

I'm looking forward to see how they play out the second season as where they leave it doesn't have a lot of room left for another season in comparison to the timeline from this first season but they must have something big and I can't wait for it.