Taking the lead from my previous post on Beers & Ideas I've decided to write about HBO's new tech based satire which pokes fun at Silicon Valley. As it's Tuesday and I want to put something new out for bloghour I'm giving myself an hour to do this post so apologies if you find it a little short.

On a slight side note; I'm not sure if it's a good or bad thing that the guys being made fun of are the same guys who got made fun of at school, took that humiliation and got rich making some awesome things that we can't live without.

Who knows maybe they'll see the funny side?

Or better yet they won't and they'll make even better stuff!

I should say as I'm only taking an hour on this there will be spoilers about the first episode which I watched last night so apologies if I ruin it a little bit for you.

The new HBO comedy from Mike Judge is partially inspired by his own experiences as an engineer in Silicon Valley. It tells the story of shy programmer Richared (played by Thomas Middleditch) and how he creates an accidental startup with Pied Piper; a music service that allows musicians to find out if they are infringing on copyright.

Richard works at Hooli, a Google level tech company, which has slogans such as "No fear, no failure" and who's employees range from those like Richard to so called "lifers" who are satisfied to meet the status quo of working at "the best company" just to get a paycheck.

It's through two of these lifers (who are basically the bullies in the geeky world that is Hooli) that it is discovered that Richard has an algorithm that is more valuable to the world than he knows. This launches a bidding war between two tech moguls including his boss and someone else he idolises. They give him two separate options; $10 million or keep the company and build it.

His reaction to the idea of going from nothing to something is understandable.

This show feels exactly like the birth of an idea, it's not quite a comedic masterpiece but it has the elements to be something great if given the chance.

At it's core what the show is about (a startup) is exactly how the show acts.

The show also decides right from the start that it wants to take on the likes of Google, Facebook, Apple and other tech giants with caricatures of well known real life people. 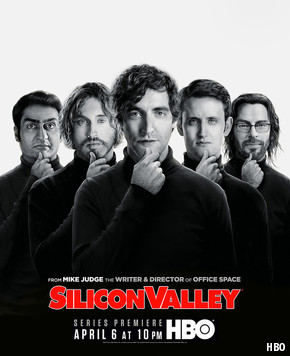 As you would expect, even their promotional material pokes fun at the tech giants as seen above where some of the main characters adopt the classic Steve Jobs pose and turtle neck that he was known for.

Speaking of Jobs it's as if he cursed the show slightly when they decided to make fun of him as one of the actors died after filming 5 episodes. Christopher Evan Welch who plays played one of the tech gods in the show (Peter Gregory) died of lung cancer. He was not well known but had a solid acting career (you might even recognise him from Rubicon). This would (probably) have been a break out role for him if the first episode is anything to go by. A little unfortunate he died before he became a regular face to our screens.

However the show is not without other talent as not one but two of my favourite oddballs are in it with T.J. Miller from Cloverfield and Kumail Nanjiani from Franklin & Bash. I watched the pilot mainly for them but also because of the great trailer below.

If you have time I would check the show out as I'm sure it will turn out to be a hit. A bit like the geeks who inspired the show.

That's all I've got for today! Hope you enjoyed it. As always I will end on something that sums it up (once I think of one)

![something that sums it up]